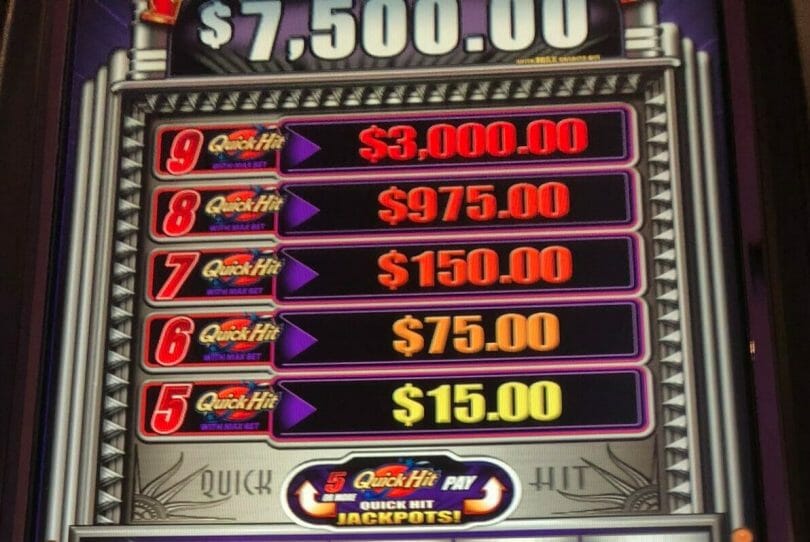 A slot player in one of the groups I frequent asked a simple question: How can you tell if a progressive is maxed out?

The answer, overall, is equally simple, but I’m expanding to talk about frozen progressives too. Those are the ones where the evil casino bean counters decided they want to save a few bucks by not having the progressives increment at all, instead making them a flat jackpot. It makes max betting on Quick Hit unnecessary when you get a flat jackpot instead of a bonus for betting more, as an example, but they don’t care about that apparently.

If you see a bank of machines, people playing, and no movement after enough time has passed, that likely means a progressive is either maxed out or capped. If the number is round, and stays round, that’s even a more sure sign. So are examples like $18,888 jackpots where they’re flat but at a more noticeable number that could be more theme specific or chosen because some find the number (like 8) lucky.

Some machines aren’t banked, so you can’t tell without playing a bit yourself, but if you’ve played a game enough you should also get a feel for how much coin-in it takes for games to increment their progressives. If you play and put, say, $20 in, and one or more of the numbers aren’t moving, that’s a reasonably good assurance the ones that aren’t moving are either maxed out or purposefully capped at that number.

If you see a progressive won and it resets to the same number, with rare exceptions, that means it’s a capped jackpot. A Lightning Link Major caps at $1,000 but continues to accumulate in the background; if it’s been long enough it could theoretically reset back to the capped $1,000 because of how long it’s been, but that’s a pretty rare occurrence.

Just remember that a capped progressive, just like the pots with coins, doesn’t mean that it’s ready or due to pay. It simply means it won’t go up any further until it’s been won.