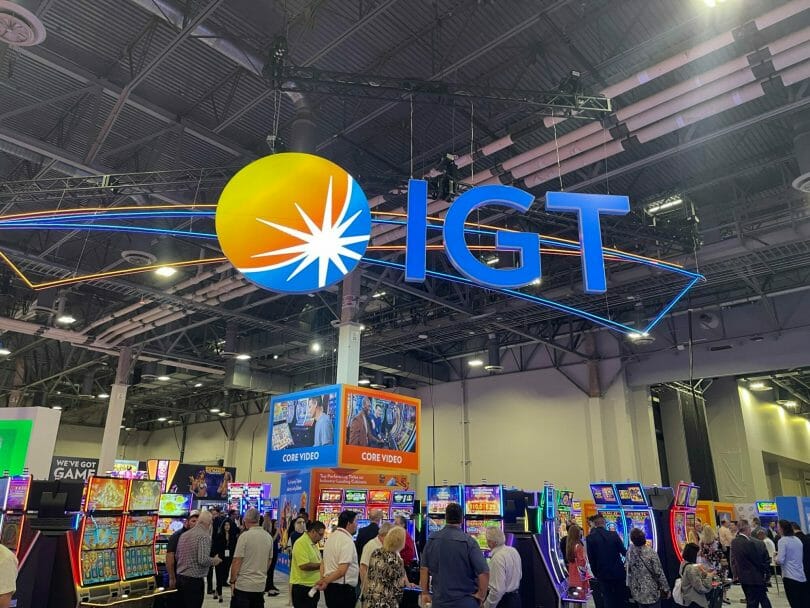 IGT always has a lot going on at its booth, and this year was no exception. They had a diverse array of games on display, covering many different aspects of what players look for from IGT. Without further ado, let’s dive into the games.

Early in the Wayne Brady-fronted series there was a slot machine introduced, but it’s been a long time since this theme has been out on a casino floor. IGT has definitely taken great care with this brand by using some great elements, from show clips to actual games from the show.

For instance, there’s Winfall, a popular game from the show ported directly into the slot. When a die appears, the color side that shows removes the peg matching that color. If there are no more pegs in that color, you get a zonk; fill all the zonk spaces to end the bonus. However, remove two of each color before running out of zonks and you get a jackpot spin.

This is exactly like how the game is played for a car on the show, and even features model Tiffany Coyne directly from the show rooting you on. Let’s Make a Deal has a lot of chance-based games so the games translate well to gambling form to begin with, so it’s great to see IGT make such great use of that here. I can easily see success for this game yielding other variations that continue to lift from the show, just has been the case over the years with The Price is Right.

Festival Link is another Link title from the company, but Joy & Luck gives you a choice between a more traditional free spins game or a match game when you trigger the bonus. Both offer cluster pays, offering a unique element regardless of choice.

The match option offers a cluster pays game with six spins and you get paid when six or more of the same color are connected. You can get additional spins when you get enough clusters matched in a row on a single spin.

The free spins offer cluster pays when four of a kind connect, with the lower paying symbols removed to hopefully improve the chances of clusters connecting and paying.

There is also a picking bonus that can load when a red envelope appears (with a perceived persistence element that grows). You can get credit prizes, play for a bonus select, and play for one or more progressives/jackpots. Additional spins can come out as well.

RandomSlots got a chance to get a demo from IGT of the Joy & Luck version:

Following in the footsteps of last year’s Da Vinci Diamonds Masterpiece, Mayan Riches Ix Chel is their latest Super Multiways game with variable reel heights each spin. The number of ways on this all ways pays game is counted on screen as the reels come to a stop, so you know the potential of each spin.

The wrinkle here is getting enough gold cash on reels coins will trigger a hold and spin that freezes the reel set’s heights for the duration of the bonus. Filling an entire reel will yield a multiplier, multiplying all the prizes on that reel (a bit similar to Cash Falls). It follows the normal get a prize and your spin counter resets to three model.

The combination of more prizes available because of the variable height reels, the sixth reel, and then the multiplier really opens up the potential.

Fortune Magnet is an interesting title in that it has a true persistence element in magnets that have prizes in two colors, blue and red, that can be awarded when the matching magnet color comes out. However, the magnets will go away at some point.

They do not go away after a set number of spins, however, so how long they persist can vary. The values persist with only the bet they were earned consistent with. When they start to blink, you know they will go away soon. The red magnet appears on reel 1, and the blue magnet on reel 5.

RandomSlots also got a look at this game as part of his visit to the IGT booth:

The last few years Wheel of Fortune video reels games have featured games that leverage existing IGT mechanics. This year, Coin O Mania is the game of choice for a base game, with the ability to add wilds to the game board when coins fall in all five spots in the Wilds at the bottom of the screen.

Added for this version are progressives, which can be won through a picking bonus. You can win more than one progressive and pick until three strikes are drawn. This is a predetermined bonus but feels like it can offer some potential if multiple prizes are won.