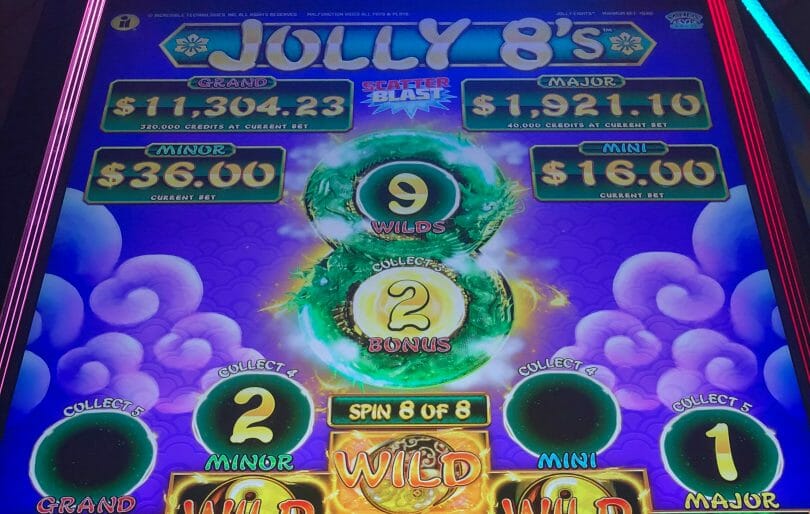 Game: Jolly 8’s
Manufacturer: Incredible Technologies (IT)
Advantage Play Potential: High
What Makes it Special: 8 spin cycles to accumulate wilds, progressives and bonuses. Items accumulated in the base games carry into the bonus, and back out, extending the spin cycle if a bonus is triggered.

Jolly 8’s is the first game from Incredible Technologies (IT) that I’ve played with a persistent state element, but the structure is not only unique, but offers some strong potential for Advantage Play scenarios when found in the right state.

While the game follows in the model of games like Scarab and Super Lit Vegas where wilds are collected over a spin cycle, other items are collected, which serves as a core differentiator on this game. The game also features a clone, Happy 8’s.

Jolly 8s is an unusual 4-5-6-5-4 reel set, featuring 40 lines and 60 credit bet increments. On this game you must bet maximum credits to be eligible for the progressive jackpots.

The reels feature persistent state accumulators which are unique to each bet level. To help, the number of wilds collected on any given bet level is listed on the bet panel.

The game functions in 8 spin cycles; like similar games, you collect wilds during the first seven spins, and then get rewarded for them on the 8th. Unlike many of the others, however, the wilds are accumulated not by a bordered frame but a simple counter; on the 8th spin they are placed randomly among the 24 reel spots.

If you manage to collect more than 24 wilds, which would give you a complete blackout of the reels in wilds, the remaining wilds carry in to the next 8 spin cycle.

It’s not easy to get that many wilds in an 8-spin cycle, but the bonus spins give you the opportunity to have more spins to collect wilds.

A quick look above the reels also shows that there’s way more than the wilds being accumulated. That’s another key difference to this game vs. others. However, once an 8-spin cycle has concluded, all of the accumulators reset to 0 and start clean for the next cycle, so each cycle is contained.

The game is on the less volatile side, in line with many other IT games, so time on device tends to be pretty good.

There are four jackpots that can be collected at any bet; the progressives are only winnable at maximum credits, but you can still win a flat jackpot at lower bets, meaning like Quick Hit for best payouts you should bet max.

The Mini and Minor are positioned over the 4th and 2nd reels, respectively, and both reels are 5 spaces tall. You need to collect 4 jackpot symbols to win those.

The Major and Grand are placed in the 5th and 1st reels, respectively, and those reels are 4 spaces tall. You need to collect 5 jackpot symbols to win those. The combination of shorter reels and more symbols should indicate the more difficult nature to win those two, which makes sense given the higher payouts.

The middle reel has no jackpots at all, but instead features Bonus symbols. The reel has 6 spaces, and within 8 spins you need to collect 3 of them. During my time playing Jolly 8’s and its clone I triggered three bonuses, and based on the game design I don’t think it’s particularly hard to hit them.

Collecting 3 Bonus symbols triggers 8 free spins. All accumulated elements from the base games in that cycle carry in to the bonus. The number of wilds accumulated are randomly placed each spin. You can continue to collect jackpot symbols, and win jackpots, during the Bonus.

If you collect three Bonus symbols during the free spins, you can retrigger for 8 additional spins. You can do this until you reach 96 free spins in total.

Best of all, whatever has been collected during the free spins will follow you back to the base game to complete the 8 spin cycle. If you collected 2 Bonus symbols, you’ll need just one more to trigger another free spin Bonus.

First off, knowing there’s an 8-spin cycle is important. Like other games with a cycle, you know exactly how much your investment will be to complete the cycle. The cycle is displayed clearly above the reel set. There’s five bet levels so there’s five opportunities to find a game mid-cycle.

Second, the number of wilds collected is of course helpful, as the more wilds there are collected, the better chances for a decent hit. The bet panel is quite helpful in showing games that have wilds collected.

But I actually think that bet panel “hint” is a bit deceptive, as there are other things that can be collected, and they may be incremented without any wilds collected. If you have a game scenario with Bonus symbols collected early in the cycle, you might be able to land a free spin Bonus, which can help collect other things in a hurry.

Indeed, the first machine I sat down had only a couple of wilds collected, but two Bonus symbols, and I landed a Bonus right away; I managed to get a Mini in the Bonus as well as some more wilds to get the game caught up before finishing off the base spin cycle.

As such, evaluating the potential advantage is certainly a bit more complex, but if you’ve got a game mid-cycle with some wilds, Bonus symbols and/or jackpots, the cost will not be that high to finish up the cycle.

The last thing to keep in mind is IT tends to develop lower volatility games. That seems to continue to be the case here, so a lot of cycles will pay a helpful amount, but at 480 credits per cycle here, compared to 750 for Scarab on lowest bets, you shouldn’t expect a massive win, although many cycles have the potential to return enough to make it worth a shot.

Here is RandomSlots‘ video on the game, which features the pay tables:

Here’s TheBigPayback‘s run on the game: