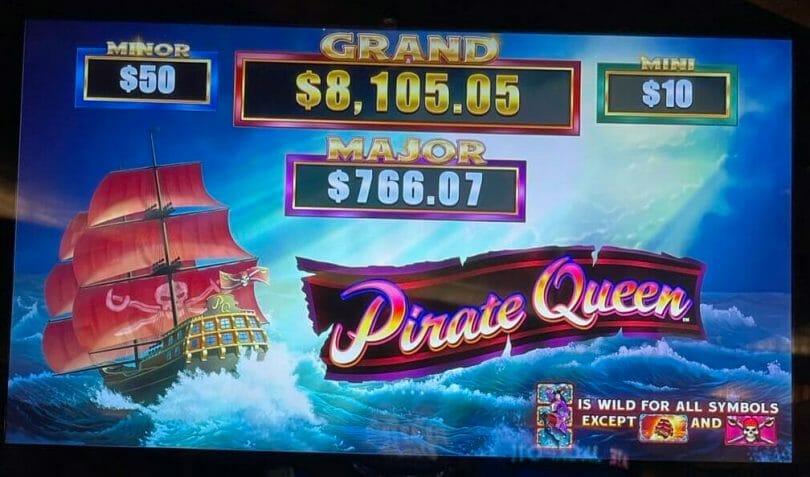 Lock it Link is a popular series of games, so it’s no surprise that variations of the game have been making their way out there, where it’s Drop & Lock, or clones of popular Lock it Link games with similar sounding names like “Lock it Up” (I’ll have a bit more on that soon.

My eye saw a game with a “Locked & Loaded” logo, which looked a lot like the Lock it Link one, and gave me a clue they managed to find a way to port the Lock it Link model to mechanical reels.

Pirate Queen is the end result of that, which leverages a mechanical 5-reel setup on what would normally be the lower screen, and a video screen above, to make the magic possible.

The 50 credit bet increments follow the standard Lock it Link bets before they began to grow starting with Hold On to Your Hat. The game features the four jackpot structure these games normally have as well.

The Pirate Flag Locked & Loaded Respin Feature effectively follows the Eureka Reel Blast/Piggy Bankin’ model of giving you five spins once you’ve landed at least six pirate flag symbols on the mechanical reels. You then move to the video screen above and get the traditional five spins to land more pirate flags. Clumps will convert to bigger spinners, and a full screen of pirate flags makes you eligible for the Grand Progressive Jackpot.

Three or more treasure chests will give you 10 free spins; you get a bigger trigger prize for more bonus symbols but you always get 10 free games. In the free spins, one of the reels 2, 3 or 4 is guaranteed to be wild. You can retrigger (albeit with no more than four bonus symbols given the wild reel) or get the Locked & Loaded feature.

If you like the Lock it Link series you’ll likely find this one fun as well; while I failed ot get any bonuses during my session I did get some good line hits to keep me active for awhile.

Nicks Slot Farm got a bonus and landed the Locked & Loaded feature in the bonus:

Matt Bailey Plays the Slots also featured the game on his channel: