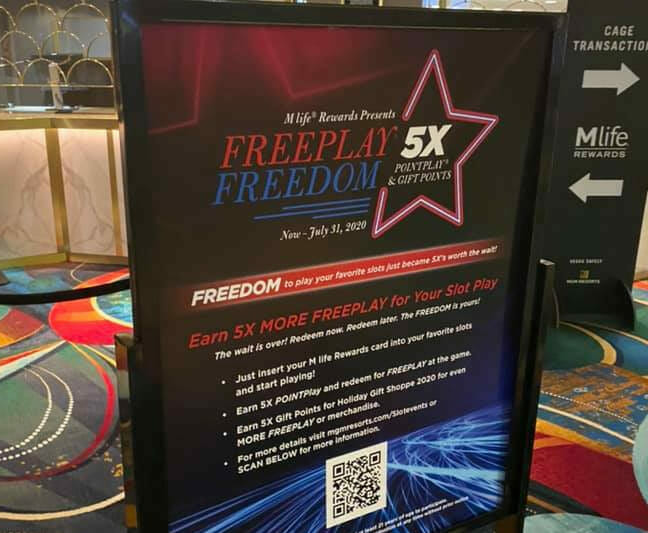 Awhile back I shared the various publicly announced plans of the various major casino companies as a result of COVID-19. Caesars Rewards shared one opportunity they had planned as part of their reopening, which was to offer a 5x Tier Credit and Reward Credit multiplier for 30 days when casinos reopened. In practice, they’ve been rolling it out in various markets the first full month they’re open.

I hadn’t seen anything similar on the Mlife side, and with their tier year changes previously announced it seemed they were just going to give players more time. However, some signage up in Las Vegas indicates they weren’t quite done.

Through July 31, players who play at Mlife locations in Las Vegas can earn points 5x faster, as well as 5x point earnings for the Holiday Gift Shoppe at the end of the year. Points can be used as PointPlay, for free play, or comps, but most players I know tend to just convert it to PointPlay. So this means you can earn points 5x faster and convert it to free play accordingly.

There are two notable differences over the Caesars promotion as it currently stands. The first is Caesars is doing one month only, which in Las Vegas is slated to end June 30. Mlife is going through July 31.

The second is that Mlife does not appear to be offering any sort of a tier multiplier. However, those who know about Mlife know the tier credit earnings rate in Las Vegas is already 5x most other markets when it comes to your gambling earnings, so that’s technically already a 5x in the market. Closer to me, MGM Springfield and Borgata are both closed, but I’d be curious to see what, if anything, either do upon opening.

But for now, those who visit Las Vegas may find the PointPlay bonus an additional enticement to devote some gambling dollars to the Mlife properties.