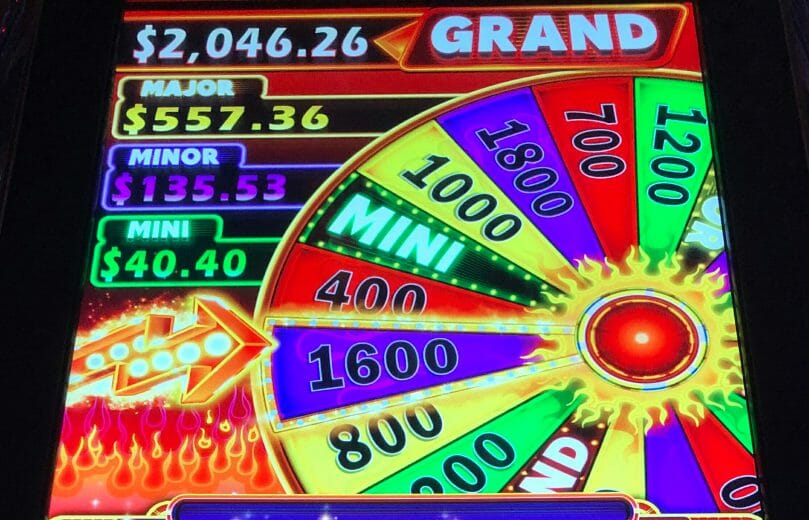 I’ve spent time over this site’s history professing my enjoyment of the Quick Spin series of games, from the original Super Charged 7s to the more recent persistent state Super Lit Vegas.

However, there’s one game type I haven’t spoken about yet, in part because I avoided it, thinking it might be much more volatile. My fears weren’t realized in a few playings of it, and now I seek it out amongst the others.

Super Hot 7s keeps the same 40 line, 50 cent bet structure of most of the other Quick Spin games from earlier in the series. But there’s a few key differences:

The pay table also differs significantly, one of the reasons I thought the volatility might be higher. To review, here’s the classic Super Charged 7s version:

And here’s the Super Hot 7s version with progressives:

The payouts for some of the bigger symbols are also bumped up, because of the slightly higher difficulty in getting a true line, but even the scatter pays on the mixed symbols pay a bit better.

In practice, this does seem a bit more volatile than the original, but not enough so to make it a hugely tougher game. It’s still quite fun, and on my most recent attempt, on a $1, bet, I hit a sizable mini of over $100, which reset back to just $40 after being hit.

The bonus symbols remain on reels 1, 3 and 5. They only pay 2x your bet, but your spins are 3x payouts, which is different from the standard games. So there’s a bit of a trade-off there.

Ultimately having given the game a bit more time and attention, I’m glad I gave it a second look. It definitely has its differences from the standard Quick Spin variations, but it’s a fun mix-up with the addition of progressives and bonus spin multipliers.

Slot Queen had an incredible run in a recent video with this game. Check it out (Quick Spin starts at 52:27):