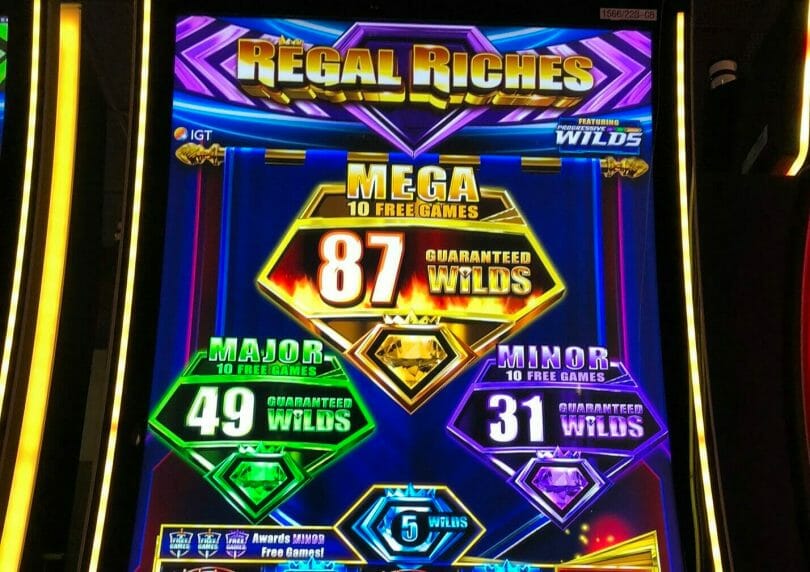 Regal Riches is another slot machine that is attaching bonus meters to three free games opportunities, but instead of a progressive free games component, this game is leveraging a Progressive Wilds component.

This more complex machine continues in the line of games by manufacturers to add more time on device, given the various ways the wilds can be accumulated and triggered.

Regal Riches is a 30-line game on a 5×4 reel set, but comes with a 75 credit bet increment. The core selling point of the game is the various Progressive Wilds elements, and as you can see on the bet panel is highlighted heavily, especially as it is connected to the free games.

There are four Progressive Wilds meters to the game, and each bet level has its own persistent state meters that remain even if a player cashes out. Here are the four meters, their starting points, and their ending points:

The Guaranteed Wilds feature is connected to the base game, while the other three are meters that are awarded when the proper Free Games trigger happens.

For progressive meters that are above their normal expected to hit point, there will be flames behind them, similar to other IGT progressive free games designs such as Harley Davidson. As usual, the flames do not indicate a bonus is due or about to hit, just that the average has been crossed.

Since the Progressive Wilds features is the only real main attraction here, let’s go over those in turn.

Guaranteed Wilds is a base game meter that collects wilds to be awarded on a random base game where free games aren’t awarded and no other progressive increment symbol appears.

The Guaranteed Wilds meter itself increases with each wild that appears on the reels. Between 5 and 15 wilds, each time the meter increments, the chances of the feature triggering increases. From 15 to 50 wilds, the chances remains the same at the highest level.

Now, there are 20 reel spaces, so how can you have more than 20 wilds? Wilds can be added to the same space, incrementing a multiplier when it does. The multiplier can get as high as 5x; any line hits that go through multiple wilds with a multiplier will see their multipliers added together, so a 5x and 4x would be a 9x win for that line.

On a spin where the Guaranteed Wilds feature will trigger, the screen will visually show that the wilds will be awarded, started by showing the number, and then applying the wilds to random spaces on the reel.

The reels then come to a stop and the pays are evaluated. As you can imagine the pays can quickly get pretty good when you have more Guaranteed Wilds.

Once the feature is done, it will reset the meter to 5.

All three progressive free games work the same, so for the purposes of keeping things organized I will cover all three here.

The way they increment is all the same. All three Progressive Wilds Free Games symbols are on reel 5. The meter is incremented whenever one of them lands on reel 5 without two other symbols elsewhere to trigger the free games. The meter will increment based on which one lands – Minor, Major or Mega.

The free games can be triggered in one of two ways:

Yes, on the Progressive Wilds Free Games, the top number is actually a Must Hit By number. The pay table words this differently than for the Guaranteed Wilds, so it does not appear the base game meter is a Must Hit By – just the free games meters.

Regardless of which free games you get, you earn 10 free games. During the course of the 10 free games, the wilds must be used up. On each spin one or more wilds can be placed.

All of the wilds on the meter cannot be placed on a single spin, the pay table helpfully notes, so you can expect them to be used up over the spins, but it will not be uniform – some spins will get more than others.

The higher the number, the more likely you will have spins with multipliers further boosting the pays. Like on the Guaranteed Wilds feature, a single space can be upgraded as high as a 5x wild.

As such, the various progressives really matter in how many wilds they can yield to you at any given time, especially since as the numbers grow, the more likely the chances for some good spins in the free spins bonus.

When the free games concludes, the meter will reset to its starting point for that particular progressive.

There are two areas of opportunity – the more immediate one with the Guaranteed Wilds, which as part of the base game and its structure are designed to occur with more frequency, and the three free games meters and the Must Hit By nature is the second, on free games that are understandably much harder to hit (which is the norm with a lot of the IGT waterfall games nowadays).

For the Guaranteed Wilds feature, a higher number is of course better, and knowing that once it reaches 15 wilds it is at its most likely to hit point means the closer to that number or beyond it is, the better the chances of getting it. Finding games with higher numbers on this meter is something to watch for.

But just remember that these bonus features, being pretty valuable, are going to be tough, and it’s an open-ended scenario given you don’t know how often or when the meters will be increments on the Progressive Wilds Free Games meters.

Here is RandomSlots‘ video, which features the pay tables, as well as a lengthy game play session:

Diana Evoni played the game and got a bonus in one of her videos:

Slotlady played the game in this video, starting at 6:40: