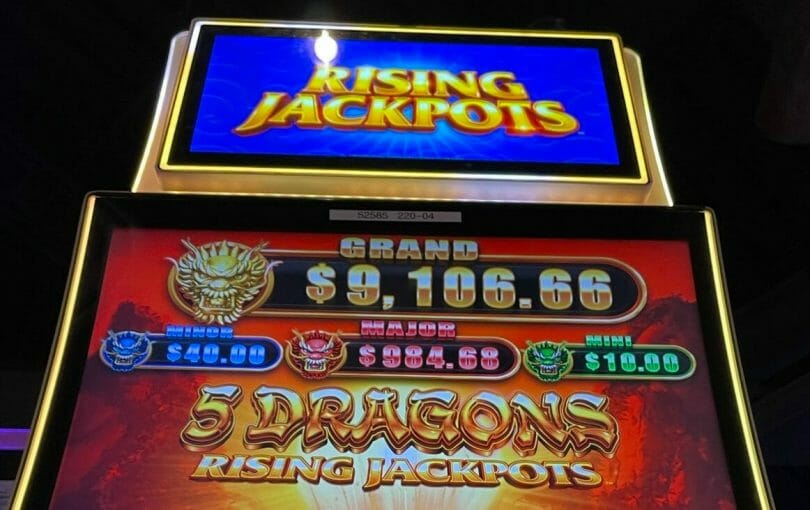 Aristocrat is generally quite resourceful at creating new games that leverage existing popular themes and take them in new directions. The Rising Jackpots series of games is one such series, which features such popular themes as Pompeii and 5 Dragons, while having a unifying structure of progressive jackpots and symbol upgrades.

On the surface, such symbol upgrades brings to mind game series like Dancing Drums and 5 Treasures, with have symbol upgrades and an 88 credit bet when all symbols are activated. There are, however, some key differences.

For this write-up I will be focusing on the 5 Dragons version of this game, but the others are quite similar.

Unlike Dancing Drums, progressives seem to be available on all bet levels. However, like games of this type, the higher your bet, the more likely you have a chance at those jackpots.

The way the pay table is written, it appears to be similar to Dancing Drums in that your odds of triggering a progressive pick is the same, and then a predetermined pick is distributed with Minis and Minors much more likely to pop up at all bet levels.

While we’re on the topic of the progressives, anytime a combination wins with at least one dragon included, you can trigger the predetermined progressive pick bonus. (Outcomes of the Jackpot Feature are not influenced by player input, per the pay table.) The Mini and Minor are flat jackpots while the others are progressives.

So, what are you getting for those upgrades? Much higher payouts. Note that no upgrades are available at the 38 credit bet; and, when you go from 78 credits to 88 credits, you get both the 4th AND the 5th upgrade.

What does that mean for your pays? A lot, actually, as the pays for both of the last symbols doubles for 5 of a kinds, and increases even more dramatically for 3 and 4 of a kinds. Given the tiny incremental bets to go higher, it seems quite valuable to go for it.

If a dragon appears in a winning combination, and at least one upgraded symbol is played (which may explain the jump from 38 credits to 58 credits for that first symbol), a multiplier can be triggered, up to 30x. The odds of the multiplier change with bet option, so it’s safe to presume that higher bets can yield better multiplier odds.

So in this case the upgrades is all about better pay table pays. This can become even more important if you trigger a bonus, as there’s an array of volatility options. You can choose the reel height/game count and potential multipliers, offering a precise control over things.

The classic 5 Dragons setup remains, where if a dragon is part of a win, the multiplier is guaranteed to be one of the ones based on your selection. Added is the chance to get additional free games on any win with a dragon, as many as 3 at a time. If a dragon is part of your win, a progressive pick is also possible.

The number of upgrades impacts how often the free games add, as well as the chances of each of the multipliers, so bigger bets helps. Retriggers are also possible; you reselect your options and do a whole new bonus, not unusual for 5 Dragons.

So, you can see where they leveraged the historical aspects of a theme like 5 Dragons and added in the upgrade concept and progressive picking of those style games, bringing the game in line with those who are fans of that model. They’re fun games, volatile as many Aristocrat games are, and provide a good amount of excitement.

Here’s a session from TheBigPayback:

And here is a session from Slotlady: