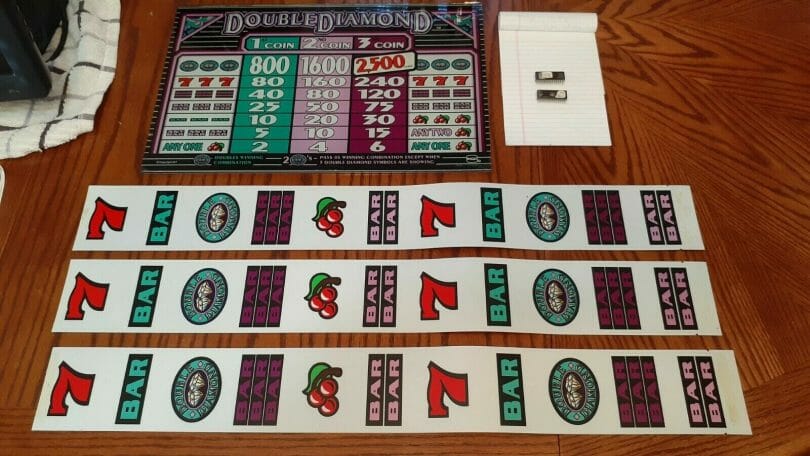 In a previous Slot Vocabulary article, I discussed the concept of a Reel Stop, which is a single position on the reels where they can come to a stop for the purposes of determining what the spin’s outcome will be.

A Reel Strip is the full set of Reel Stops that can appear on a given reel. In the world of mechanical reels, there are traditionally 24 reel stops, 12 with symbols and 12 spaces.

Virtual reel mapping can extend the number of outcomes by making some spaces more common than others, and computerized slots with computer animated reels can have reel strips that are much lengthier.

The days of mechanical reels meant they also came with physical reel strips, which have the various symbols printed on them. They would be affixed to the reels, so players would know visually how they did on a spin. They could leave them out, but that would be a much more confusing game to play.

Of course, older slot machines also needed new decals or glass, as seen above, so it was a bit more of a project than swapping out software on today’s modern computerized slots. And even games that stayed put could occasionally use some TLC as the reel strips could sometimes fade, either the color ink or just altogether.

Looking at some of the physical reel strips can help you see how the slot games are designed to ensure some outcomes are somewhat rare. Notice for instance that the reel strip on the far left has a lot of bells, while the far right has a lot of 7s. This ensures getting five of a kinds of either won’t be particularly easy, especially with the single wild symbol on each not offering much additional help.

The middle reel strip further starves of symbols, by featuring only one bell symbol and one each of the 7s symbols. The 7s have mixed symbol pays so that helps a but, but clearly this is designed to keep 7s payouts infrequent, not surprising given the game’s generous payouts for those symbols.

Of course, virtual reel mapping could balance that out somewhat, but generally design decisions like this are somewhat intentional to make five of a kinds more special and be able to pay better.