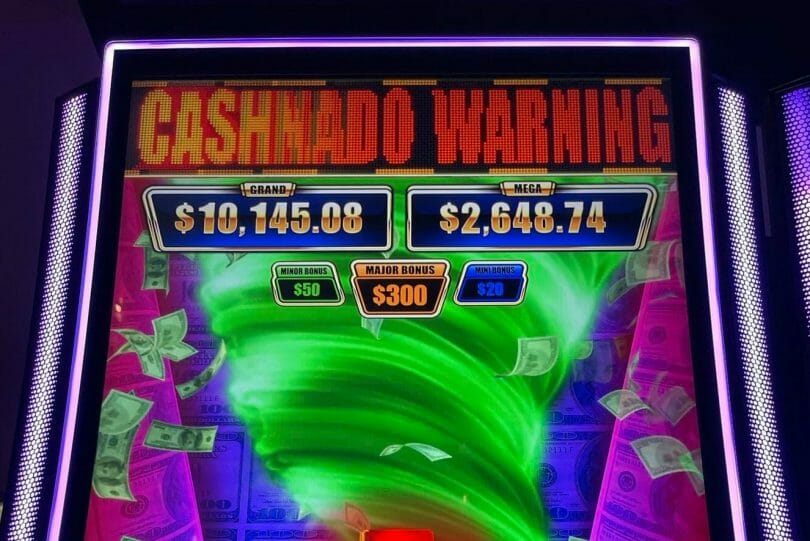 While talking with Everi about their extension to the Smokin’ Hot Stuff Wicked Wheel series, I realized I had a rare opportunity to share with readers here a bit about how a slot machine comes together.

As part of my recent conversations with them, I was able to talk with Coty Goodwin, Executive Producer at Everi’s Studio 7 game studio and who I met last fall at G2E. Additional information came from Dustin Dies, game designer at the same studio, and who also spoke with me about the Smokin’ Hot Stuff Wicked Wheel extension.

These are people with a quite an elaborate and deep history developing slots; Goodwin’s responsible for producing approximately 70 titles during her six years at Everi, running the gamut from video titles Super Dragon™ and Super Buffalo™, Press Your Luck™ Whammy Riches, Cashnado™, and The Karate Kid™ to mechanical reel titles Black Diamond Platinum®, Black Diamond Deluxe®, and the upcoming Triple Jackpot Gems Deluxe™ and Blazin’ Gems Deluxe™.

Goodwin’s role as a producer on a slot game covers a variety of activities, she said. “Producers are not only project managers that drive schedules, but contributing members of the game development team that understand why we are making design choices to produce the best game possible.”

Producers are overseeing a variety of projects at a time. “A producer will work roughly six active games in varying stages of the development cycle at a time and typically release about 6-8 initial release titles in a year,” Goodwin said.

Anatomy of a Team

Of course, a producer isn’t alone on a team, and as you can imagine a slot machine takes a variety of contributors across a range of skill sets.

Goodwin said, “Our game development team consists of design, math, art, audio, software development, quality assurance, and a producer as well as our key stakeholders who provide ‘fresh eyes’ during the development cycle.”

The number of people involved can vary depending on the project, but Goodwin noted that “There is no truer statement than ‘it takes a village.’ Outside of the primary development team and key stakeholders, an army of people exists to support each project, from supplying supplement tooling and systems, to giving advice on a product line.”

Each Game Has Its Own Needs

Those varying scenarios mean a team size can be supplemented when, for instance, a particular game requires a more robust graphical treatment.

“Smokin’ Hot Stuff Wicked Wheel Fire & Ice™ had a standard development team with ad hoc support members as needed,” Goodwin said. “We were fortunate to have returning team members from the original title who understood the nuances of its predecessor.

Goodwin added, “Although a standard development team is typically the norm, we will have larger teams involved on rare occasions like Cashnado™ which had more artists and developers who worked on the project compared to previous games.”

If you’ve seen Cashnado™ in person, you might understand why there would be more artist and development support. The size and resolution of the screen, the amount of graphical efforts to implement all the movement constantly happening on screen, the shift when Frenzy Mode is in play – there’s a lot of things going on, but with the right internal support, those talents can make the game’s unique qualities shine through.

Seeing a Slot Through Development

A game will generally start with ideas, whether it be game components or a brand, such as Smokin’ Hot Stuff. Game designer Dies notes the variety in which these initial ideas can take form.

“Game concepts derive from a variety of places depending on project goals,” he said. “Many of our games come from a sketch of bonus mechanics and ideas from our math and design teams, which we will then take and attach art and a theme. But, we have plenty of games where we start with a theme or a license and then match gameplay ideas to that theme. In general, we approach design with a math first focus.”

Goodwin added, “We want each discipline to have ownership of the design to ultimately produce a game that delivers an incredible and memorable experience for players.”

“In general, we can break development into these broad phases: Design, Development, and Testing:

“Throughout Design and Development, we get internal and external feedback to improve the game experience. We have a variety of quantitative and qualitative data efforts to continuously learn and make better games, including test bank programs through casino partnerships.”

How Long Does it Take?

Because no two games are the same, it can vary in terms of how long a game might take, Goodwin said.

And then remember this is going in parallel with some other number of releases. A number of years ago, Everi was targeting up to 100 releases a year with what was then a smaller team. Then they shifted their focus.

“We made a concerted effort about six years ago to focus on quality over quantity as our business needs changed,” Goodwin said. “We took more time to develop a game, adding in more opportunities for exploration and refinement which we believe has been a successful approach.”

But Everi as an entity continues to grow, which means it’s possible to release more games while maintaining that approach as a business. Goodwin added, “We continue to grow our game development organization, so it is likely we will see those big numbers on releases each year again.”

My thanks to the Everi team, including Goodwin and Dies, as well as Lee Higgins and Michael Conway, for providing this opportunity to learn a bit more about how they develop games! And if you missed my previous conversation about Smokin’ Hot Stuff Wicked Wheel’s new extension, check it out now!

Do you have questions about how slot machines are developed? Submit them through our Contact Us form or as a comment below, and we’ll see if we can get them answered in a future conversation!