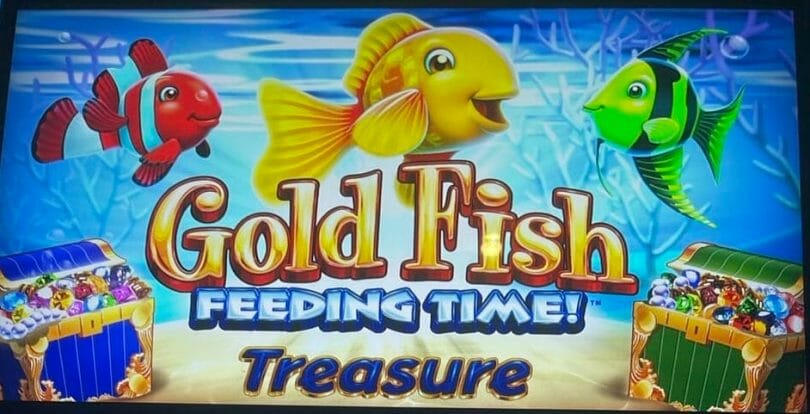 The classic Gold Fish theme has been around for roughly 20 years at this point, and it remains quite popular, so it’s no wonder that a modern edition has been released. The game was showcased at G2E last year and had a lot of people waiting to try it.

This format sees the five fish of Gold Fish spread across two complimentary themes; I say down and played the Treasure version of Gold Fish Feeding Time.

One thing that you’ll find is that there’s 1-2 large fish symbols that come out each spin (both in the base game and any free spin scenarios), thanks to a mystery symbol scenario that fills them in each spin.

The combination of the tall symbols and the ability for up to two to be on the reels each spin certainly makes line hits tougher, but when the fish line up they can provide the bulk of your base game line pays.

In Treasure you have three fish that will upgrade your bonus:

On its own the Gold Fish bonus generally has the most potential, given the coin prizes that collect, the most free spins with 10 and the chance for more spins or the wheel. Of course, all the bonuses are sufficiently volatile that you can win big, or not, depending on what comes out.

Like many three pot/bag/etc. games, the bonuses have the ability to combine. There are therefore three fish food shakers, colored to match the fish above, and a bonus can be triggered with any shaker. However, two shakers of different colors can trigger a super bonus combining the two, and all three shakers can trigger the extreme bonus.

The number of free spins you get varies from 5-10 spins depending on the shaker(s) that trigger a bonus. Bonuses that include the Gold Fish always give 10 spins. Green Fish bonus alone gets 8 spins; all other permutations give 5 spins.

Both largely relied on a strong hit to deliver much of the value; you can see the wilds and fish came together for what worked out to be a 75x hit on the super bonus, which provided the bulk of the value. Without that spin it’d be a more normal 25x bonus.

The fish bonuses are the only bonuses on the game, so that’s really what you’re working for.

Diana Evoni tried the game during one of her videos:

NewEnglander82 had a jackpot handpay on the game on a super bonus (this video features clips from both versions):