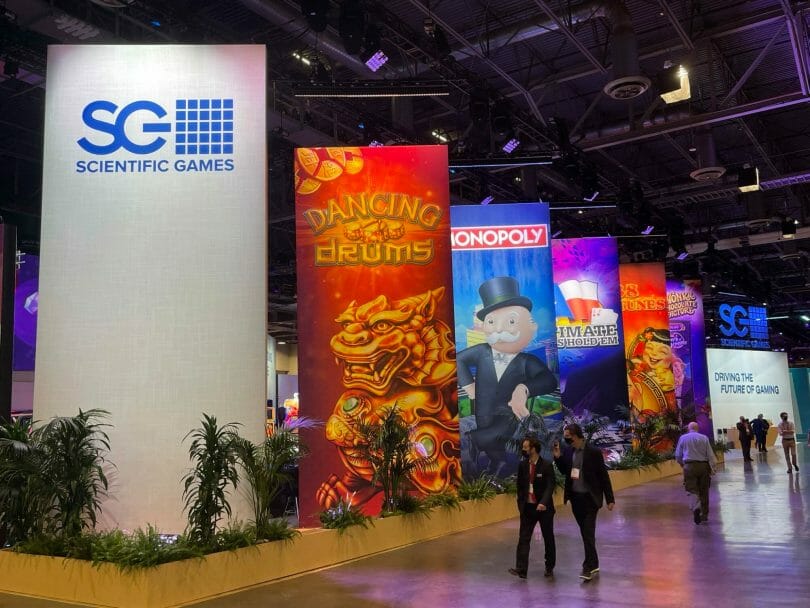 Scientific Games has been a company that’s been in some ways a bit uneven until recent years. Some of their subbrands, like Shuffle Master, succeeded in keeping their popular brands out there and doing brand extensions (think 88 Fortunes). Others, like WMS, didn’t see their games being updated for new cabinets, and so as casinos removed the old machines from the floors, the games were disappearing.

That’s been an issue that has been remedied in recent years, with both remakes and reinventions a big part of what’s been driving Scientific Games forward. Combine that with brand extensions of popular properties like Monopoly and Reel ‘Em In, and sequels to popular series like Ultimate Fire Link, and you’ve got a line-up full of familiarity.

Here’s a look at some of the games I saw at G2E in Las Vegas for 2021, along with some videos from channels who filmed at the booth.

The Lock it Link series has been a popular one on the casino floor, so it’s not surprising that the games are seeing sequels this year. Huff n’ Puff has probably got among the most attention of any game I can think of in recent years in terms of fervent demand to play it, so this sequel will probably draw a lot of attention.

The bet panel looked to be the same bet levels, which was nice to see for a sequel.

The biggest change is around the bonuses. Instead of collecting six hats in the base game to trigger a bonus, three or more buzzsaws instead trigger a wheel spin.

The wheel that can award:

One change to the standard bonus is if a hat lands where a brick border already exists, it will now send that hat to another space to upgrade another space instead.

Otherwise, the game is clearly building upon what made it successful, with new chances to upgrade the bonus with some better running starts.

Huff n’ More Puff is covered in both The Slot Cats and Diana Evoni’s videos at the end of the game.

This is another Lock it Link sequel, this time an upgrade to Eureka Reel Blast. Golden dynamite is the addition, with a feature enhancement if you land one of those, while still needing six dynamite overall to trigger the feature.

The feature enhancement for a single gold dynamite widens the screen, giving you more room to collect dynamite and build bigger connected sets of dynamite to get a larger cart colors/ore (silver, gold, gems) with bigger potential prizes and longer trains as the cart type increases. The carts pay out similar to the Cash Express Luxury Line where the carts roll by with prizes and can potentially award a jackpot.

The feature enhancement for a double gold dynamite opens up both screens to spin for dynamite, allowing for more prizes and potentially more carts with ore.

The bet increments are upped to 60 credits from 50 credits, likely to make room for the features added by the golden dynamite.

RandomSlots got a tour of the game at the Scientific Games booth:

This direct sequel to Ultimate Fire Link adds the Super Fire Link feature, but also changes what happens when you get three bonus symbols.

Super Fire Link is differentiated by having a taller grid, 12 high vs. 8 high, for more chances to unlock rows and fill spaces. This works very similarly to the Power 4 version with an Unlock Row symbol, but also adds fireballs being shot onto the reels from above, as well as landing naturally on their own as the reels stop.

The Fantini Research video at the end showcases a Super Fire Link bonus in action.

Another sequel to the Ultimate Fire Link series, Golden Fire Link adds some new elements to the Fire Link bonus, such as the Golden Fire Link ball (which appears to house progressives) and a full reel spinner at the top if you unlock enough spaces to unlock it. There’s also fireballs with prizes spinning which adds some additional volatility.

The basic idea is still the same though: Four or more fire balls initiate the Golden Fire Link feature, and you get three spins to collect more, with success in collecting more resetting things back to three spins.

In the recap videos at the end of this article, you can see the game in action with The Slot Cats.

The Monopoly series of slots has leveraged some of the brand extensions Hasbro has done with Monopoly in recent years to draw inspiration for the new versions of Monopoly hitting the floor this year.

Once such example is Monopoly Lunar New Year, whose theme is based on the board game of the same name. Many of the premium symbols are drawn from the game as well.

This is another three pot game, which clearly is drawing from the Fu Dai Lian Lian model of things (as well as their own Coin Combo series), where a coin on the reels can trigger a bonus. Their three pots are:

Like the other three pot games, you can potentially mix and match if you get multiple coins in a spin, with a triple bonus being possible if all three land and trigger.

The game is an all ways pays game, so the expanding reels does open up the number of ways to win during the bonus. Add to that the chance for multiple multipliers can surface, and this looks like a pretty volatile game in its own right.

Here’s a video from RandomSlots with the game’s designer:

Another Monopoly game with a board game inspiring it is the Monopoly Cheaters Edition slot machine, which plays with the same concepts as the board game that inspired it.

This version has a playful Mr. Monopoly who can bring in various “cheats” to help a player out not unlike the way Hot Stuff upgrades the Wicked Wheel games.

The cheats are triggered when Mr. Monopoly appears on the entirety of reel 1. Aside from that reel acting as a fully wild reel, one of the following scenarios are among those that can happen:

At the end of any of the cheats, he can also throw money down to up the final payout for that spin.

The game also features both a free spins bonus and a board bonus. The free spins work just like the base game, but with an increased chance for Mr. Monopoly to land on reel 1 and offer a cheat.

The board bonus is triggered by three community chest bonus symbols. You pick a community chest, which awards dice rolls, and the amount awarded can be upgraded by Mr. Monopoly. Hotels are then placed on the board to yield a chance to multiply awards on some of the properties.

Some of the non-property spaces also become features of their own:

As traditional for Monopoly, rolling doubles awards an extra roll. Mr. Monopoly can cheat the counts to move you farther along the board, moving you to higher paying properties. The board itself is a bit truncated from the regular board to help you get to the higher paying spaces a bit faster.

The playfulness of this game will surely get players’ attention.

Here’s another video from RandomSlots featuring the game:

As it happens, you also win any line hits under the coins, so you can get both coin values and line hits from the same spaces in the same spin.

When you get three Sumo symbols, you get a wheel that can award a jackpot or free games with a certain number of frames added each spin. So there is a volatility aspect to the bonus, depending on what you spin.

The Slot500Club video below has video of the game in action.

Compared to the original Gold Fish, the designer states that the game is harder to bonus, but pays should be better.

Each have three gold fish bowls (the Gold Fish and two others; the five fish are therefore spread out across the two themes). Shakers, color coded to the fish, will feed the fish, and they can grow. You can be awarded one, two or all three bonuses in a single spin (sound familiar)?

The fish upgrade spins during the free spins bonuses. Each fish has its own unique upgrade, and shakers can award more spins.

Land two Hot Hot symbols, reels 3-5 can expand, and you can win the credit prizes or jackpots that connect to it. Hot symbols are wild. Sound familiar? This is Scientific Games’ take on the Wild Wild mechanic.

The other change is the bank can go into a frenzy mode, but you’re only playing for the Hot Hot feature during this frenzy mode. Multiple Hots on reels one and two will offer a multiplier. If frenzy mode sounds familiar, that’s because that’s something Everi has been making a signature for the last couple of years, and noted in my G2E write-up of Everi recently.

Slot500Club has video of that game below as well.

Here’s a recap of some of the games at the booth with The Slot Cats:

This was Diana Evoni‘s recap from G2E at the Scientific Games booth:

Slotaholic featured Super Reel ‘Em In, a game I didn’t review above, in this video starting at 8:05:

He also covered Water Works, another Monopoly game, in this video starting at 10:15:

Here is a recap of games reviewed by Slot500Club at their booth:

Fantini Research has their round-up of a few of the games and other SG developments here: