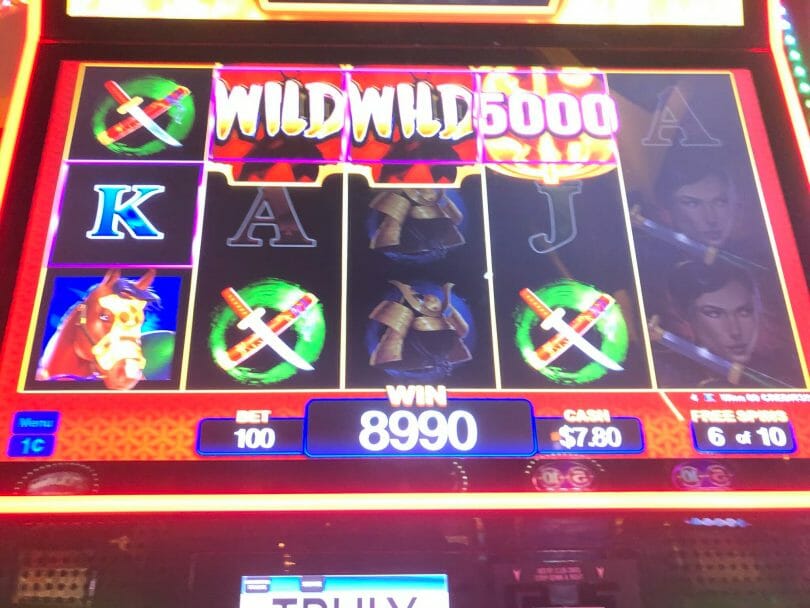 Recently, one of my locals (Mohegan Sun) swapped out one of my favorite AGS games (Eastern Dragon) with another game. I’ve been trying to give AGS games more of a shake, even though their volatility tends to be on the higher side, as my luck on them has been pretty good.

So I sat down and gave this game, which is part of AGS’s “Hot $ Jackpots” line, a couple of tries over the past few visits there, and I was not disappointed.

The game is an all-ways pays scenario with a stack of progressives that are available. The base game, like many AGS games, is pretty volatile in its own right with stacked symbols and other scenarios that can pay out pretty heavily if the right combination presents itself.

The game has an interesting feature where if a $ appears and is part of a payline (it acts as a wild), you not only get paid for the payline but the amount on the $ symbol, which could be a jackpot.

When you get to the free spins bonus, both the $ and wilds can slide in from outside the visible reel set to upgrade a winning combination or create a winning one if you’re lucky. In my case, as you can see at the image at top of this article, I got a 50x $ collect on top of a decent line hit, and I ended up with a 100x bonus.

I actually bonused on both attempts of playing, which I think was pretty lucky; unlike some AGS games where the symbols have to be on connecting reels starting from reel 1, you just need a minimum of three scattered bonus symbols to get the bonus.

It’s another fun, if volatile, game from AGS and is a nice addition to their line-up; I know I’ll be giving the Hot $ Jackpots games some more play to see if my luck holds up.

The only video I can find of the game as of this writing is AGS’ own promotional video for the series: