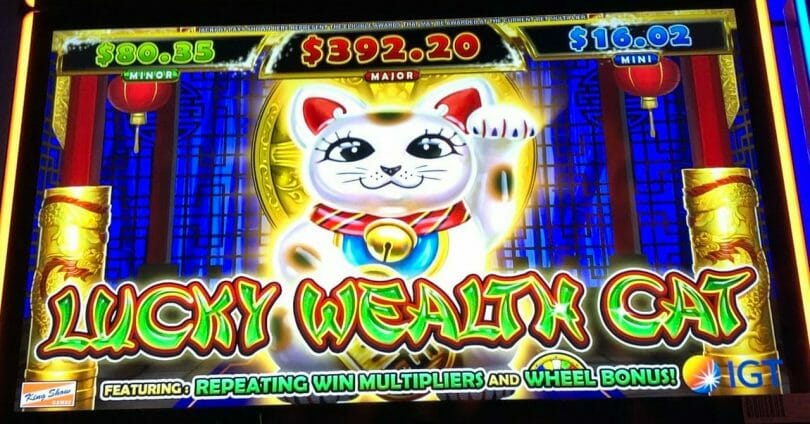 Lucky Wealth Cat is an unusual clone in that, other than a few symbol substitutions and the name change, this looks and plays exactly like Lucky Buddha.

Game: Lucky Wealth Cat
Manufacturer: IGT
Advantage Play Potential: Medium-Low
What Makes it Special: Line hits trigger multipliers that are accessed if the same symbol pays again within 7 spins. Multipliers increase in the bonus. Persistent states carry activated multipliers into and out of the bonus.

Slot machine clones are not unusual – the development of games, math, and structure are sufficiently complex that a clone sometimes helps justify such development by spreading the wealth of the development cost over multiple games. Other times, a clone will be released to capitalize on a game’s success while avoiding it looking like 50 copies of the same game are out there.

But Lucky Wealth Cat is an unusual clone in that, other than a few symbol substitutions and the name change, this looks and plays exactly like Lucky Buddha, previously reviewed on the site. The sound effects, music, graphics and so on are all completely lifted from Lucky Buddha.

Let’s review what this game brings to the table.

The game is a 5×3 reel set. It’s a 60 credit bet step but only 30 lines, so a lot of muscle goes into some of the features, in this case the multipliers and progressives, as opposed to the non-multiplied line hits.

The Repeating Win Multiplier recurs in this game, and is locked to each bet level as a persistent state feature. When you get a line hit with a symbol, a multiplier will activate for 7 spins. This multiplier differs by symbol:

If you get another line hit with the same symbol within the 7 spins, you’ll not only get that line hit multiplied, but the counter for that symbol resets again to 7 spins.

While the multipliers add volatility to the game, there is a low symbol count – three poker symbols, three more premium symbols, a wild and a bonus symbol – eight in all. This offsets that multiplier volatility. The multipliers bring decnet line hits enough to keep things interesting.

The wheel bonus is unchanged from the Lucky Buddha version of the game. Three bonus icons will trigger the wheel bonus, both in the base game or the bonus. There are a number of options you can win on the wheel bonus:

The free games are won through the wheel, and only the wheel. They work like the base spins, but the persistent state multipliers are higher in the bonus:

The persistent state multipliers provide a much better opportunity to capitalize on line hits than a game without any active, and the spin cycle is such that you know how much you will need to invest. The game tends to throw out new line hits that activate new multipliers, so working until none are left may not necessarily be the goal, but if you see the cat active with 7x that could certainly have value.

Lucky Wealth Cat is primarily on a newer cabinet still rolling out, so the game is not in too many casinos, but here is a video from Jerry’s Channel: