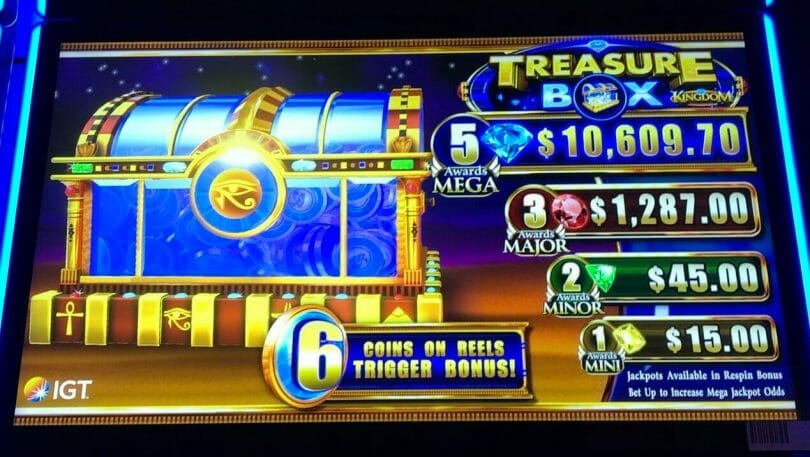 It seems IGT is still noodling with various ways to tinker with the respin format to find a winner.

It seems IGT is still noodling with various ways to tinker with the respin format to find a winner. Their Fortune Link series was out of one of my local casino within a few months, but the Treasure Box series tries some new things and introduces a persistent state Bonus Meter, something IGT has been quite fond of lately, as one iteration on the concept.

I played the Kingdom version recently at one of my locals. Here is the general lowdown of what to expect on the game, and the game series.

Treasure Box Kingdom uses 50 credit increments, but features an all ways pays format, so 243 ways to win on the 5×3 reel set. This adds some initial volatility to the game; in my first $20 in the game on a 100 credit bet on pennies ($1per spin), I got almost nothing.

One way this game differs from other link games is when the coins with values appear, you win them, regardless of how many appear on the screen. So coins are always good, and don’t just serve as a blocker to line hits, and as such bears a bit of a similarity to Fortune Coin, another IGT game. You win any line hits along with any coins, every spin. Each coin is valued at 10 to 750 credits, times the line multiplier.

Wilds appear on reels 2, 3, 4 and 5 and in one of the mystery symbol scenarios can be added, improving the chances of a win when they are selected.

Another way the game differs from other link games is the number of coins needed can slowly be whittled away. The number of coins required starts at 6, like many link games. However, each time a key lands completely on reel 3, the count is reduced by 1. The bet panel shows how many coins are needed at any given time, and each bet level has its own Bonus Meter with the coins required to trigger the Respin bonus.

If enough keys land that the counter reaches 0, or you in a single base spin and more coins than are required on the Bonus Meter, you will trigger the Respin bonus, one of the two bonuses the game has. The game also offers a Free Games bonus.

When the bonus initiates, a Treasure Box appears on reel 8 (which is the centermost reel of the bonus; each space effectively becomes a reel for the duration of the Respin bonus).

Then the bonus begins with three respins available, similar to most link games.

Landing another symbol resets the Respin counter, but there’s a variety of things that can land, which splinters off from other link games:

If you run out of spins without collecting another item, the Respin bonus ends, and all coins and jackpots earned are awarded.

In this way the Major is somewhat controlled by the multiplier, and higher wager levels would increase the chances of winning a higher progressive, as per normal. In fact, the Respin reels are set up at the beginning of each Respin bonus and factors include bet level, number of locked reels to start the bonus and the number on the Bonus Meter at the time the bonus was triggered.

At the completion of any Respin feature, including if it happens on a base game or Free Game, the Bonus Meter resets to 6 coins required.

You can only win one of each of the progressives; the flat Mini jackpot can be won more than once.

Three or more pyramid symbols trigger the Free Games bonus. The number of games is determined based on the number of symbols landed:

You can retrigger during the Free Games, to get the same number of games based on symbols landed as you did when the bonus was triggered.

There are different reels in use for the bonus and the mystery symbol arrangement is reduced to a much smaller set of symbols, presumably to boost the ability to get line hits in the Free Games.

If any coins land and are collected during the Free Games, they are awarded at 3x the base game value for the duration of the Free Games. This means coins are worth 30 to 2,250 credits times the line bet during the bonus.

This game is all about the Bonus Meter for the Respins. The closer it is to 0, the more likely a bonus is nearby, both because it can be triggered by the coins, or whittled away to 0 by more keys. In one session I went $20 to get a single key, and then got three more keys in quick succession followed by enough coins to trigger the bonus.

That certainly is not going to be the case in all scenarios, but the closer to 0, the less work is required to get that Respin bonus, and with the ability for the Treasure Box to scoop up coins and open up more spaces again, it does seem the bonus has a lot of potential to deliver, since you can also win one or more progressives as you go along.

Since there are five bet levels, that leaves five opportunities to potentially take advantage of, depending on where the Bonus Meters are for each bet level. And while the version I played was not a multi-denomination version, in the videos below you can see these exist, so there may be multiple denominations to check.

Diana Evoni played the game in a recent video and got a handpay:

She had another great session on the game after that:

King Jason Slots also played the game and got the feature starting at 1:20: