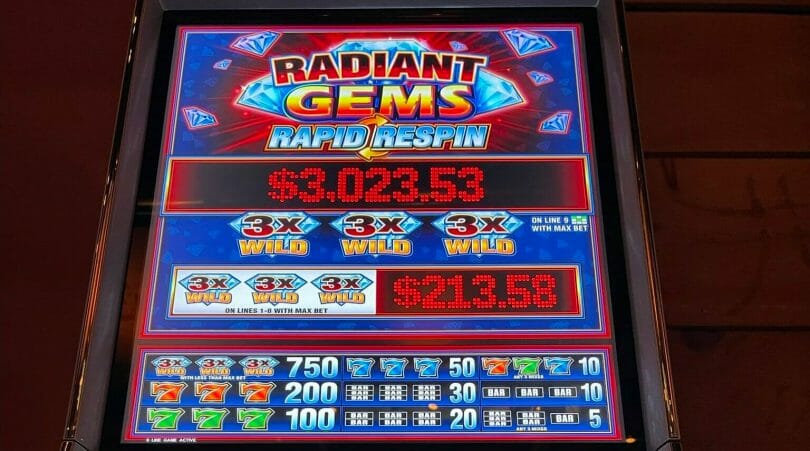 As I’ve written about pretty extensively as of late, a number of manufacturers have been releasing new mechanical reel machines, and with them, new games for them. Many of them have followed the 9-line, triple wilds yield progressive variety, and Light & Wonder is no exception.

Like others, Radiant Gems Rapid Respin is a 9 line game, so at quarters it’s an accessible $2.25 a spin when the max bet is set for 9 credits, which it was in my case. Of course, on higher denominations it gets more pricey, but it does offer a multi-denomination format in this case. The pay table also leaves room for there being a max bet that’s more than 1 credit per line, so the exact setup will depend on your casino.

The new wrinkle for this game is the Rapid Respin – if you get a respin on reel 3, you are guaranteed a winning respin. If the symbol appears again, you respin again and are guaranteed a winning respin again. So that can be a nice way to pick up some credits. During my recent session on the game I got one and it did help pad the bankroll just a bit, but I wish it would’ve given more.

One thing I very much dislike about the new Light & Wonder games is that it makes the loud sound on the first and second reels when the 3x Wilds land on a line, it does the anticipation spin, and then if the third 3x Wild comes out, it makes the sound on the last spin, whether it actually lines up with anything or not. This creates a lot of false win-type scenarios where it sounds good but means nothing.

On many slots the sound doesn’t get made if the line-up didn’t happen, you don’t have enough bonus symbols, etc. even if one lands on the last line. I wish this was the precedent they followed. I find myself a bit less attracted to these as a result – if the sound were more muted, I might enjoy the game more, but it makes it so blatant and really brings it to your attention that you’re not getting the line hit.

Otherwise, the game is fine – with only 3x wilds they’re not going to come out as often as, say, the three wild formats on the Everi games, it still offers a decent amount of action.

Here’s a short on the game from 1st Spin Magic Slot Channel: