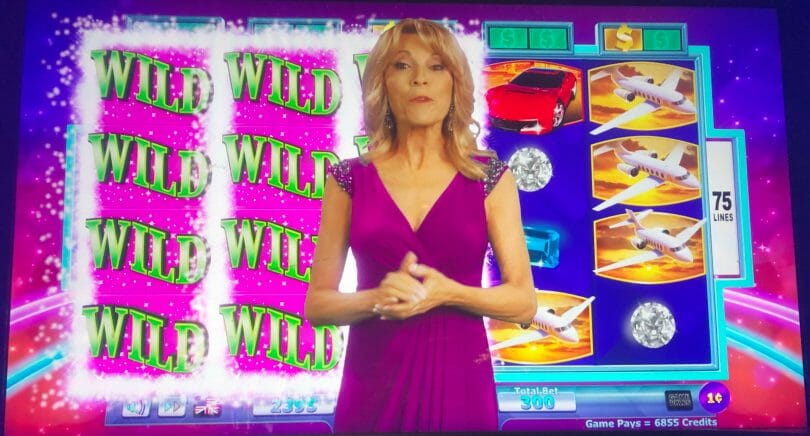 After my recent trips to Atlantic City, I had started to believe that the pervasiveness of Advantage Play machines in today’s slot floors, combined with the sheer volume of people playing in casinos in big markets, meant that despite the potential for competition, I’d still trip across the occasional Advantage Play opportunity.

Having now returned from my 17 days in Vegas, that was indeed the case. In today’s post I’ll share some of my observations about what I observed while playing in Sin City.

Whereas local markets may have more knowledgeable players and some full-time players taking advantage of what other players leave behind, the sheer size of Las Vegas means a lot more gamblers, and a lot more opportunities being left behind.

Many gamblers in Las Vegas are also casual gamblers, and may not even gamble at home – which means they simply don’t know their games.

Take a look at this scenario I found on Wheel of Fortune 4D. No doubt the player was happy to get a full screen of wilds, good for $225, a fantastic return on a $1 wager. But they cashed out without realizing they left four full wild reels behind for another spin. I was able to step in and grab $61.50 off that additional $1 spin.

While I know there are full time Advantage Players reading this site (and I very much appreciate it!), the primary audience I’m writing for is the casual slot player. For those of you in that category, just being aware of your surroundings, and the basic rules of how these games work, can ensure at the very least you personally don’t leave money on the table, but perhaps you’ll catch things like this too.

Popular Games Have the Best Chances

It probably is an obvious statement, but the games that get a lot of action, like Wheel of Fortune 4-D, are likely to be the ones with the left behind Advantage Plays. The fact that they are also usually positioned in prominent, easy to see spots on the slot floors also means it’s generally trivial to glance over and see if the games are busy or if anything obvious has been left behind.

Games that get played more will simply be more likely to have great scenarios left behind. Golden Egypt, which is structurally nearly identical to Wheel of Fortune 4-D, and more prevalent on some casino floors, had fewer opportunities left behind, but I never saw anyone playing them either.

Meanwhile, on Wheel, I padded my bankroll by hundreds of dollars across my trip, which certainly helps keep me in the game for the duration of my trip.

There Was Competition, but Very Minimal

Another surprise was I didn’t see more people checking machines. I played at the Oyo Las Vegas, a small casino, and I saw an older gentleman slowly circling the floor checking machines. On a floor that slow he’s sort of wasting his time – he was rechecking machines 10 minutes later that hadn’t been touched once since he last passed through.

Some Advantage Players I have spoken to have various little things they will do to help them confirm a machine hasn’t been touched since their last pass through, which saves time and allows them to look for other opportunities.

I encountered one player at Luxor who was attempting to be very efficient and fast playing through one machine when he saw I had sat down at another. In this case there was a bank of four machines, three of which had opportunities, and it was clear he was aiming to take the third before I did. But that was the only time I encountered anything even remotely that aggressive.

For the most part, I found plays very obviously and easily, both on the strip and downtown.

Skill Games Had Potential Too

I’ve shared my affinity for Lucky Words, which when the progressives are in the right position can be another helpful contributor. They had the game at multiple properties, including MGM Grand, Park MGM and The Linq. Interestingly, The Linq games had much smaller progressives consistently, a sign a player was targeting them. But they also seemed to not pay back in a regular round nearly as well as either Park MGM or MGM Grand.

It could be how MGM has them configured relative to Caesars, but Caesars let you earn Tier Credits and Reward Credits on them whereas MGM didn’t. That is likely another sign that Caesars’ games were set to a lower payback setting.

Paying Attention Pays Off, But Luck Helps Too

Spotting plays is half the battle, but getting them to successfully convert is the other half. On this trip, my luck converting them was pretty consistently strong.

If I hadn’t had this play out in this way, I wouldn’t have picked up $100 within two spins. So you still have to be willing to take a risk on these plays, although the whole points is a higher than average potential for something lucrative to occur.

The reality is these plays crop up often enough that if you keep an eye open, you’ll find chances to convert plays to cash. I successfully added hundreds of dollars to my bankroll just casually looking around – if I worked harder it could’ve been even more, and the end result of that was a trip where my bankroll held up quite well.

My recommendation is that if you’re a regular reader of the site, and you’re getting comfortable with the games talked about here, you should keep your eyes open. It could yield some helpful results that can either send you home with money or at minimum reinforce your bankroll.