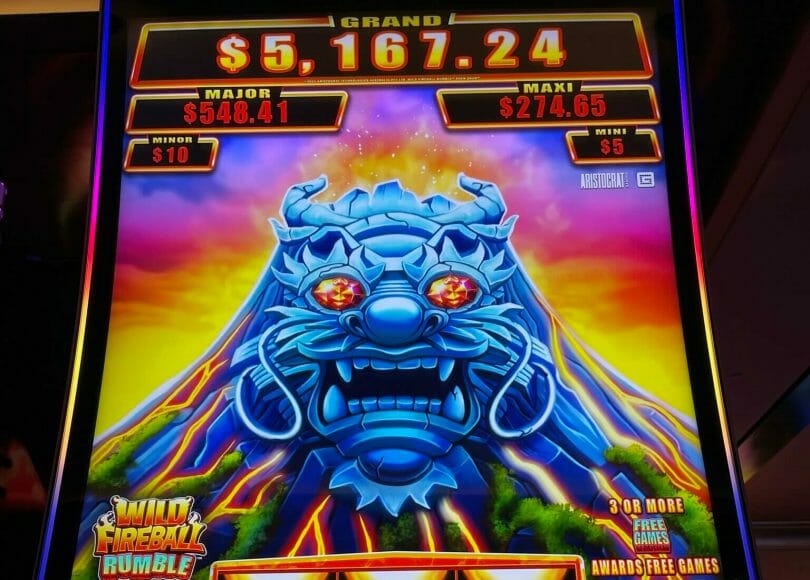 Gimmie Games started off with a line of lower volatility games, and then flipped directions with games like the Mighty Cash series and Cash Xtreme Rising. But that doesn’t mean they all have to be absolute toughies.

An extended session on Wild Fireball Rumble gives me the inclination that it’s a bit of a smoother ride than many of their others. There are two themes, but the idea is basically the same.

The game has 80 credit bet increments with a 30 line base game configuration. Occasionally those line counts can increase, but we’ll get into that in a moment.

Fireballs appear on the middle three reels and act as wild symbols. This is one way the game gives out frequent payouts, with smaller amounts.

Cash on Reels symbols appear on reels 1 and 5; on reel 1 they can serve as a blocker as the only time they pay out is when the Fireball Rumble feature is triggered, which we’ll talk about in a moment as well. The fact this game has only 30 lines by default makes it even more of a blocker.

The game has a number of features and bonuses. Let’s cover each in turn.

If a Cash on Reels symbol appears on reels 1 and 5, and at least one wild fireball appears on each of reels 2-4, the Fireball Rumble Feature is awarded. Each fireball will spin and award a value of 50-10,000 credits times the bet multiplier. If a blue fireball lands, it multiplies each prize by 2-5x.

As you can imagine, the game tends to favor smaller prizes, but big ones can be won.

On any spin where a blue fireball lands, a Jackpot Feature can be awarded. This is a predetermined pick bonus (the pay table confirms this, saying “Outcomes of Jackpot Feature are not influenced by player input” which is a fancy way of saying it’s a scripted bonus).

You pick until you get three of one of the five jackpots, three of which are progressives and two are flat jackpots that shift proportionally based on your bet. One wrinkle is that your jackpot is awarded 2-5x, because the blue fireball is, in this feature as well, connected to a 2-5x multiplier.

The progressives award the additional prizes at their reset value. Higher wagers increases the chances of winning a given progressive proportionally.

Winning the Free Games feature requires three or more Free Games symbols, with how many games you win depending on the number of symbols triggering the bonus:

The middle three reels are fully expanded to the 50 line form for the duration of the bonus. Retriggers are possible with the same options above.

With the taller reels on all spins, line hits and Fireball Rumble features have a better chance of occurring, which is nice.

The Fireball Rumble isn’t as hard to hit, given the smaller prizes involved, and I got them with multipliers a number of times during my play. I had some ups and downs, but the bonuses came quickly enough to keep me in a range for most of my session, and it was active so it was a lot of fun.

It’s definitely not going to be the least volatile game on the casino floor, but it should keep you going for awhile and give you some fun bonuses along the way! It’s worth a try when you see it out on the floor.

TheBigPayback had a bonus on the max bet of the machine:

Albert’s Slot Channel featured the game in this session:

KURI Slot gave it a shot on free play: