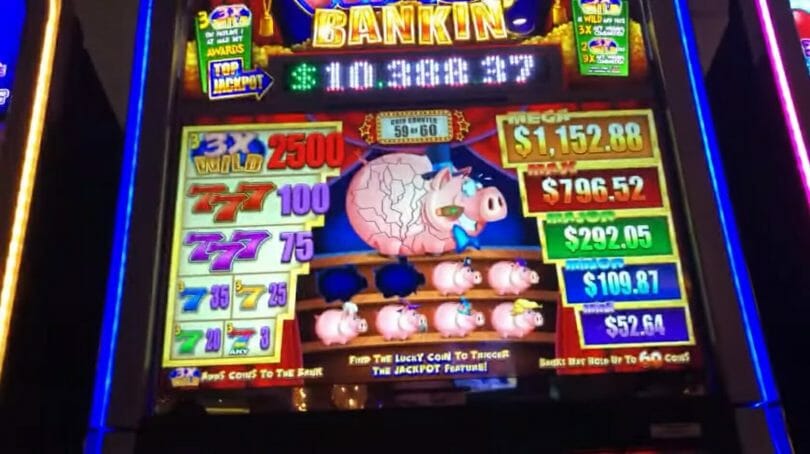 Game: Piggy Bankin’
Manufacturer: WMS
Advantage play potential: Medium-Low
What Makes it Special: The less Piggies and coins to complete a piggy required, the closer to a progressive pick bonus you are.

Last year I reviewed New Year Festival, a classic WMS mechanical 3-reel game that offers an Advantage Play in the persistent state firecrackers that effectively worked as a “must hit by” progressive mechanism in that you were guaranteed a progressive before the firecrackers ran out.

Piggy Bankin’ uses the same idea, but it’s coins in piggy banks, with 9 piggy banks vs. 15 firecrackers. But they are ultimately clones.

Many players are familiar with the more recent Lock it Link game with the same name, but this classic Advantage Play machine is known by some players and is still played regularly at casinos that have it.

Let’s review the game and how you spot the Advantage Play. But first, a huge shout-out to Brian Christopher, whose video these screen captures were taken. In fact, these were from a private Rudies livestream. The Rudies is Brian’s fan club membership.

Like New Year Festival, Piggy Bankin’ is a pretty simple game. The only symbols are a variety of multi-color 7s which pay mixed, a 3x Wild symbol, and… that’s it. There are 5-line and 9-line versions. This version shown is a 5-line high-limit version, but the video embedded below is a 9-line low-limit version.

When the 3x wild symbol comes out, it not only multiplies line hits when it lines up (and two can multiply by 9x), but it adds coins to the piggy bank. The amount of coins added is in a range, and depends on whether it’s the low limit or high limit version.

If the lucky coin is captured on a given spin, you enter a progressive pick screen. Like New Year Festival it’s predetermined (the pay table even says “picks are for entertainment purposes only”), but unlike New Year Festival you keep picking banks until you reveal a win.

Each pick reveals one coin, so you pick until you reveal three coins connected to a progressive. There are five progressives in total – the top two are definitely harder to hit than the lower three, given their amounts. But that doesn’t mean you’re going to be constantly saddled with the Mini, either.

Once the progressive pick is completed, the piggies reset (as does the progressive you won), some coins are dropped in to the first piggy to get things started again, and you head back to the base game.

Just like the firecrackers on New Year Festival, there’s a total of 510 coins spread across 9 piggy banks. One random coin out of that 510 is the lucky coin. As 3x wilds are hit, coins are deposited, lowering how many coins must be collected at a maximum before the progressive bonus is reached.

So, if you find a machine with less piggies left, you’ll know you’re closer to a bonus. Less piggies left on the top box is what to look for. If you’re past the half way point it’s at least worth a look, especially if the progressives are built up a bit, and if you’re at three pigs or less you should sit down. Just keep in mind those 3x wilds can come in clumps or not at all, so this is one of those risk/reward sorts of games.

Here is RandomSlots‘ video featuring the game, as well as the pay table.