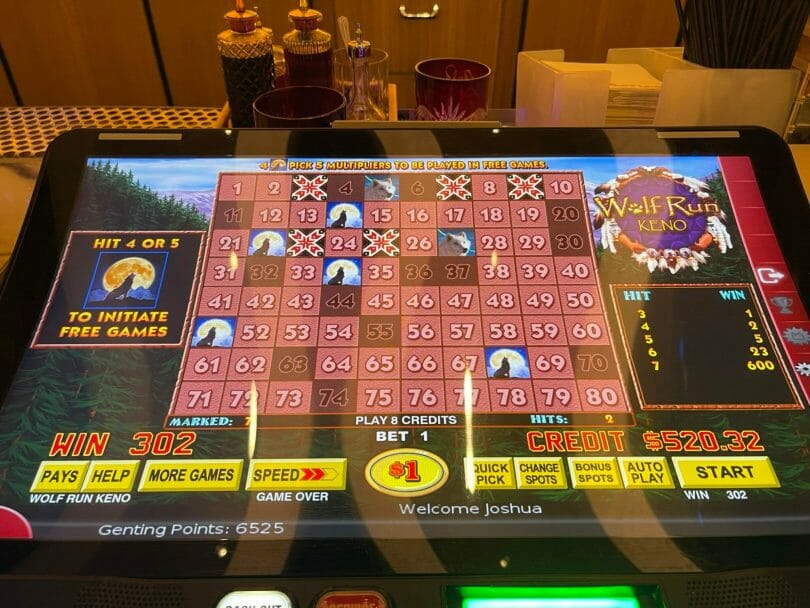 While I know the site is called Know Your Slots, and I primarily focus on them, I certainly play other casino games. In the past I’ve noted that I play Video Poker, but on occasion I’ll give Keno a go.

For instance, while in Las Vegas this year, I hung with some (larger betting) friends in the high limit room of Resorts World. But on my budget, I played one gold symbol Dancing Drums high limit at 80 cents a spin, and 1 credit $1 keno at the bar for my free drinks.

This brings me to Wolf Run Keno, which is what I primarily played at the bar there, and which I also played earlier this year at Plaza Las Vegas in the awesome Sand Dollar venue.

For those who don’t understand Keno, it works similar to other lottery-style games in that there’s a range of numbers you can select from, and a set number are drawn each game, which in this case is 20. What makes Keno unique is you can choose how many numbers you bet, and the pay table is determined by that decision.

This opens up the door to a lot of volatility, especially picking more numbers, but for those looking for the least volatility the sweet spot is seven – getting 7/7 numbers in Keno is about as hard as getting a royal flush on Video Poker. It’s not impossible, but certainly not something that will happen every session.

But you can win with as little as 3/7 marked, which is 1 in 6. The overall odds of this version is among the best to at least win something, which is why it makes sense to start there if you’re getting to know Keno.

Wolf Run Keno, like many keno variations, introduces the idea of a bonus round. There are five spaces selected each game with wolf symbols. Matching 4 or 5 of them will trigger a bonus.

The overall odds of hitting that multiplier are 20/80, or about 1 in 4, but if you can beat the odds it’s effectively an open-ended bonus. The fact that you work your way through the multipliers from smaller to larger builds the suspense nicely. Even better, you can retrigger, getting more picks with the same setup as the initial trigger.

My photo example at the top of the article shows a 300x bonus win, my best so far, but I’ve had other bonuses and it’s not necessarily hard to get that bonus. The odds of getting 4/5 wolf symbols matched is less than 1 in 100, so it gives a reasonable chance to get into a bonus fairly frequently.

QuickHundySlots has given it some good play – here’s one great example of the bonus with a five symbol trigger:

Keno Lady Adventures gives it a try in this video: