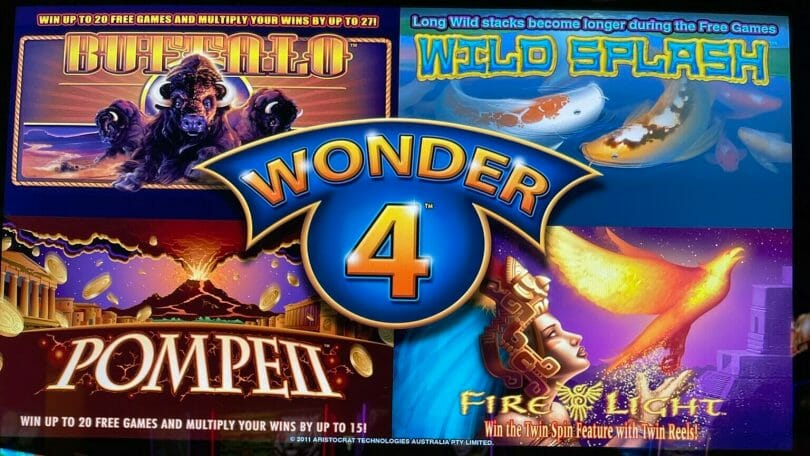 In my recent video on slot machines with a value bet filmed with the American Casino Guide Book team, one of the game series I mentioned was the Wonder 4 series. Today, I want to talk about one of the earliest entries in the series, which are still found on casino floors today, and have a couple of things going for them in terms of value bet.

For one, the older version picked older games which many times had lower bets. The version seen in the top image above was one that had Buffalo, Pompeii, Wild Splash and Fire Light.

Pompeii has a 25 cent bet per board, and Buffalo a 40 cent bet per board. Playing four Pompeii boards can get you the magical $1 bet I’ve evangelized as being possible for this series, whereas Buffalo is still quite reasonably at $1.60. Mix two of each and you’re at $1.30, still quite a nice number for getting to play four slot boards at the same time.

But the games are built with oodles of line hit potential, as well as bonuses that amplify them, because that’s what you get in spades from old school Aristocrat machines.

On one recent session I was having all sorts of good luck on this machine, including this 15x line hit of $150 on Pompeii on what was a 25 cent bet for the single board. For that board this is a 600x hit; even for my total bet it’s a perfectly useful 150x hit.

Here’s another example of what can happen on a small bet. This was on a bet that was just 40 cents for this board; the $54.00 win on that bet works out to 135x the bet for that game.

The thing that makes Wonder 4 so wonderful, as it were, is you’re spreading your bet among four games, and the lines/ways among them, spreads your bets around and helps reduce the volatility somewhat, vs. betting a similar amount on a x4 line bet of a single board of the same game.

I love these games for some decent action on lower bets, and the originals are among my favorites for the old school games and the great pay potential.

Which Wonder 4 version is your favorite? Share in the comments below!