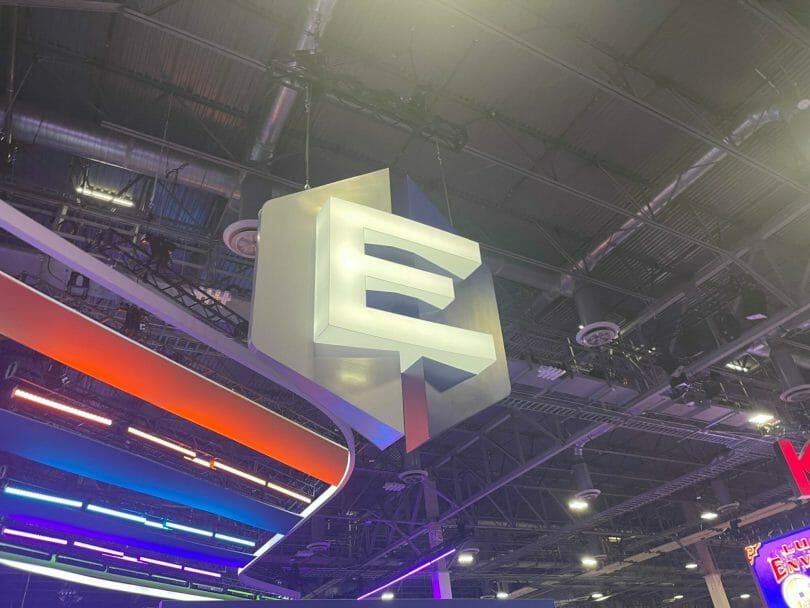 Everi is generally one of the more fun booths to check out each year at the Global Gaming Expo, or G2E, in part because despite their growing presence on the casino floor, they’re not afraid to take a swing here and there to try something unique and different.

One of those was actually a new cabinet, called the Dynasty Vue. I saw a number of manufacturers bragging about multiple monitors tied together under a single pane of glass, but Everi literally took the screen real estate of two 27 inch monitors and cut down a larger screen to basically make it one big square-ish monitor.

It’s strikingly different despite being adjacent to a common casino form factor, and can be banked in their trademark pods with beautiful lightning interconnected. Everi does good work on the cabinet side and this is no exception.

But what about the games? They had a few games on display in this format, so let’s start there.

One of the games the new cabinet was showcasing also is another reason I like to check out Everi’s booth – they are not afraid to break the format of slots and try all sorts of new formats. In this case, Money Slam gives you a chance to win prizes that are interconnected, as long as at least one prize touches the first wheel, and all the other prizes are touching each other starting from that one.

So effectively this is entirely a cash on reels type game, not unlike Moneyline, another game they showed off last year, where if you have symbols on reels one and two you win what’s on reel three (an overview of that will be arriving shortly as part of my regular slot write-ups).

The game features a wheel, also like Moneyline, that can be won when it’s one of the interconnected symbols. A Respin symbol can appear on reel 5, respinning all the reels to hopefully land more prizes and connect more of them. Free Spins symbols can also appear, and if they’re interconnected you’ll win the free spins.

There are multiple variations, each with its own free spins, following what Everi has done with other games like Cashnado.

RandomSlots features Juan Mariscal of Everi explaining Money Slam and how it works:

Another game on the new cabinet is called Combo Cash, and has the interesting quirk of combining the Cash Machine mechanic of win what you see and treating it as a bonus feature above a more traditional video reel slot game.

The idea was to make the win what you see feature available on a penny denomination game. Getting at least one $ on the reels unlocks a reel on the win what you see, and if a 0 appears you can unlock the others for a chance to win a bigger prize, for instance. You can get more than one $ and unlock more than one space above; unlocking all three gives you a better chance at a win.

Combo Cash also has multiple themes, each with its own free spins bonus, but each bonus comes with additional opportunities to open up the win what you see reels for instant pays.

RandomSlots also saw a demonstration from Juan Mariscal on this game:

Everi continues to work with various ideas that work under their Frenzy Mode format. One game is Super Fiesta, a game that leverages the piñata art from deep within their history of making games, and bringing it forward to 2022.

During the Frenzy Mode, this time called Fiesta Mode in line with the theme of the game, you’re searching for a Piñata on reel 5, which awards credits as you whack the piñata, and you hope that you also collect candies that can award additional, and potentially lucrative, prizes.

There’s also a hold and respin feature with locking wilds; if wilds land where wilds already are held, it makes them a multiplier wild. Landing more wilds also resets the counter, yielding more spins, so the wilds are what you’re aiming to collect, vs. the more traditional cash on reels prizes.

Fruit Ninja Frenzy features a couple of new elements. It has a traditional hold and spin, but if you land a golden gong during the hold and spin, each spin for the remainder will upgrade one or more prizes each and every spin until the end of the bonus. Multiple gongs will just do even more upgrades.

The game also features a Frenzy Mode, which is tied to the Fruit Ninja theme by getting a sliced watermelon to award an Arcade Bonus. You then swipe away at the fruit to win credit prizes. The pomegranate at the end award additional credits or a progressive.

During my walkthrough it was indicated the base game is a bit more volatile and the frenzy mode has a more frequent bonus. For players of these games, you can sometimes notice a shift in the prize types and how often you get them, which can take pressure off during less volatile scenarios, for instance. The fact that these games can shift directions for a few minutes is unique and something still pretty much uniquely an Everi offering.

The popular Little Shop of Horrors sees its first brand extension with the Director’s Cut. The Rampage bonus is the biggest new addition here, which is similar to the feature on the Karate Kid where you can see multiple reel sets, stacked wilds can be added, and so on.

Audrey’s Wheel looks to be enhanced with upgrades and other elements the original didn’t have. For instance, you can get multipliers or extra spins on wedges. And it can nudge to a better prize, similar to the Wicked Wheel series.

Players who love those random features will definitely enjoy this version of the game. One thing to note is some of the progressives are now flat jackpots that shift based on the denomination and such.

Everi has a history of having popular mechanical three-reel games, and Juan Mariscal told me they wanted to try a true persistence feature on that format. They went simple and put a Pay Upgrade multiplier on reel 3, which if landed will multiply 7s and bars pays by 2x for the next three bought spins. So players can have access to better pays at the same wager for three spins when this feature is activated.

Otherwise if follows the basics blueprint many Everi mechanical reel fans will be familiar, with mixed bars and 7s, as well as the wilds with multipliers that can award progressives when landed as a three of a kind.

Another theme with Pay Upgrade is Lightning Wilds, which has the ability to add other multipliers with watermarked symbols with multipliers on it, a more volatile take on the same idea.

Lift Off is another game with a Frenzy Mode. The cash on reels symbols is deployed in two ways; during the base game, you want to get six for your standard hold and spin.

They add a wrinkle in the hold and spin where certain spaces have multipliers, and there’s also a rocket award that can award the rocket award, which pays out every coin on the screen, which can be won multiple times before collecting everything as normal at the end. The counter resets with each win, so you could fill the board and keep awarding it.

During Frenzy Mode, called here Hyperdrive, you want the cash on reels with the special symbol, which can either collect the prizes or trigger a bonus, Diamond Warp, that can award more coins or award additional diamonds.

Fantini Research got a tour of Wild Wheel Otter, which is a new variation of the Wicked Wheel format on their new cabinet; Super Fiesta; and Little Shop of Horrors Director’s Cut.

Slotaholic got to spend time with Michael Conway and Juan Mariscal of Everi to get information on Little Shop of Horrors Director’s Cut, Super Fiesta, Lift Off, and Fruit Ninja Frenzy.