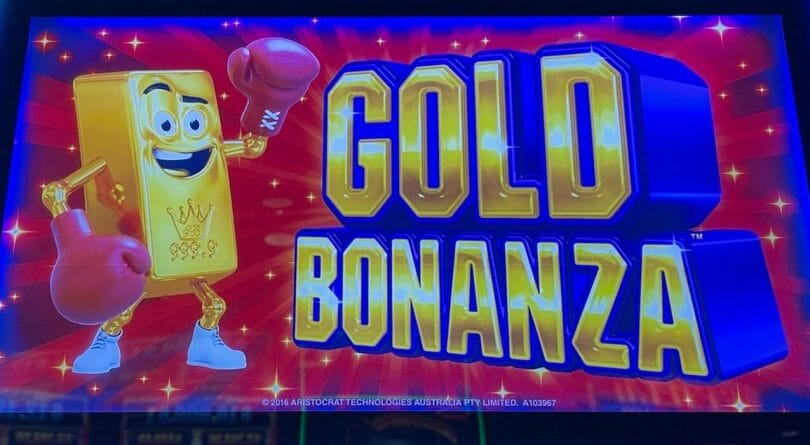 Aristocrat isn’t shy to leverage existing mechanics and math to develop new games. Gold Bonanza is an interesting case because it’s got a bit of hold and spin, a bit of enduring free games, and a bit of some other ingredients, but they come together to make a compelling game of its own.

There’s two themes, but I’ve primarily played the Happy Piggy version, and that’s the focus of this write-up here.

The game is a 60 credit, Reel Power (all ways pays) game that includes clumped symbols and wilds (along with the occasional wild reels) to amp up the potential of the game’s payouts.

Indeed, part of the reason why Piggy Power can get interesting is just line hits of high paying symbols like those piggies. This was an exciting piggies game before All Aboard Piggy Pennies, Piggy Bankin’, or others that have made their way to casino floors in recent years.

One thing that’s somewhat unique is that any progressive can be randomly won. That means you could randomly win the mini, minor, major or grand progressive jackpot.

At the start of any spin, one or more power reels (designated as reels 2-5, with the gold trapezoids up top), can turn fully wild.

The game features a secondary mechanic of reel strips behind the core reel strips that, when appearing in a cluster, can yield a benefit.

Four gold reels touching together can yield a bonus payout of 60 to 1000 credits times the bet multiplier. However, five gold reels will yield the Bonanza feature.

When the Bonanza feature is triggered, between 6 and 15 spaces will be filled in with a prize (by the boxing gold bar character from the top screen). Then the standard hold and spin mechanic happens – 3 spins to get another prize, and the counter resets if successful. The bonus ends when out of spins without landing another prize, or if you fill all 15 spaces the grand jackpot is won (standard Aristocrat link rules, basically).

However, those power reels come into play again, and any of them can be multiplied by 2, 3, 5 or 10, as long as a progressive doesn’t appear in the column, which can be tough as the game is a bit more prone to drop out those minis and minors in the Bonanza Feature than a traditional hold and spin.

Those gold reels can also be upgraded at the conclusion of a bought game, yielding a bonus prize or Bonanza feature.

This is very reminiscent of Buffalo Deluxe, in terms of the multiplier potential, and the fact they can only land on reels 2-4. (However, the full wild reel can still land on any power reel, including reel 5, although only one can land per spin in the bonus round.)

During the bonus, if you collect 5 reels to yield a Bonanza Feature, a counter will accrue how many of them you’ve earned, and will play them out after the free games.

The game’s got a lot to it, but that’s part of the fun – the base game, Bonanza Feature and free games with multipliers all offer some potential, keeping the game interesting and fun for players.

Here’s a video of the game from TheBigPayback:

Diana Evoni has had great luck on this game over the years. Here’s one example: