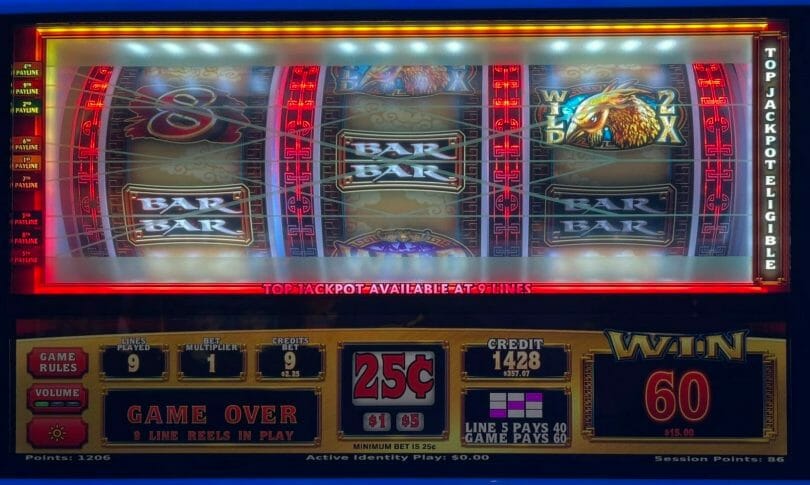 I’ve been talking about how various companies have been releasing their own versions of 9-line, multi-wild, multi-progressive mechanical reel slots. IGT followed up one of their mechanical reel successes, Jin Long 888, with Jin Feng Gold Phoenix, one of two themes that abandons the wheel bonus in favor of a more straightforward free spins bonus.

The game features a 9-line format, like the other games, and you have to bet all nine lines to be eligible for the top jackpot, as it only is awarded on the 9th line. This is not unusual for these formats (although Ainsworth awards it on any of lines 5-6 on Grand Legacy, their take on the concept).

Line multiplier bets could be possible, but was not configured on the version I played. The game is a high hit frequency game, which can make it more fun for players who like a lot of action.

One thing IGT’s version supports is multi-denomination, so you can switch denominations and play at a level that’s comfortable. When I played Jin Feng Gold Phoenix at the Cosmopolitan earlier this year, it was available at quarter, $1 and $5 denominations. That means a quarter denomination max bet is a reasonable $2.25, a level I like for this sort of game.

The Asian theme of this version sees the game swap out the mixed 7s with 8s, but the mixed bars and 8s are similar to how other games handle things, and lowers the volatility somewhat. The game also has three different wild symbols of different colors, but one wild symbol is a 2x multiplier as well.

There’s also a free games bonus, which is awarded when three bonus symbols and/or wilds match up on a line to provide 8 free games. The chances for progressives increases in the free games bonus, and you can also retrigger for 8 more games, up to the point of getting 200 free games.

Overall, the game is a good high denomination game that offers a free games bonus to shake things up a bit in a format that’s been replicated a lot in recent years.

Here’s a promotional video from IGT:

Purple & Gold Slots played it on their channel as well: