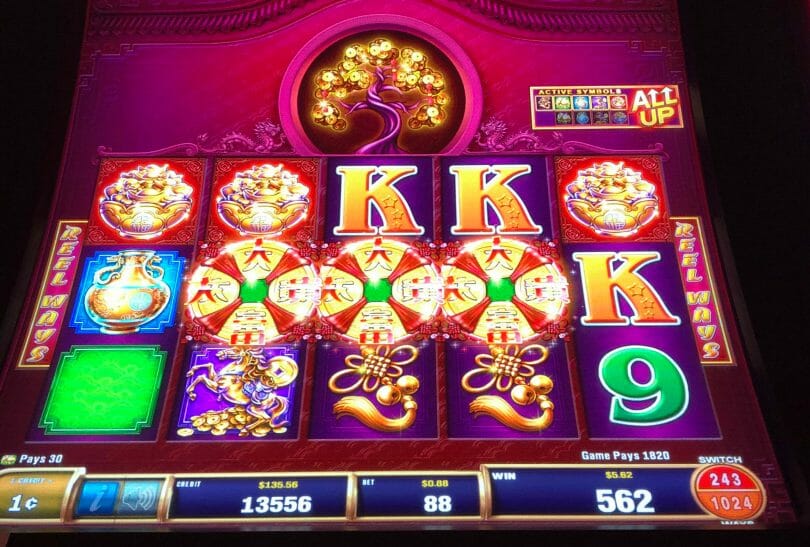 For those that are fans of the 88 Fortunes/5 Treasures/Dancing Drums lineage of games from Shuffle Master, a division of Scientific Games, Tree of Wealth will hit the spot, in part because it follows the same general math model.

But this set of games does introduce a few new wrinkles to keep the games interesting, and both have a volatility choice for the bonus.

The betting options are the same as other games in its lineage, with the ability to choose 1-5 gold symbols as well as your line bet. Based on the number of gold symbols active, it also determines which progressive jackpots for which you’re eligible.

The stacked symbols, all ways pays and high volatility you expect from games like this are firmly in play, and the four progressive structure from Mini to Grand is maintained here as well.

To avoid repeating reviews of games like Dancing Drums, I’ll focus here on a few of the highlights that make this game series different. I’ll also highlight the key differences between the two themes in the series, Rich Traditions and Jade Eternity.

One change in this game series is the progressive pick screen (which is still predetermined) now has 15 symbols, and three are “Double Luck” symbols. If matched, whatever you progressive you win will be awarded twice – once at its final won value, and the second at its reset value. (The visual has also been changed, appropriately, from a pot to a tree with gold coins on it that slowly fills as wilds land.)

The reset value of the mini is a bit higher, and paired with a potential to double the progressives, it gets a bit more exciting when the tree shakes to announce the progressive pick is coming.

Second, the wild symbols feature an additional multiplier feature on some (not all) wilds that sit in the third reel. The Rich Traditions version features a x2 multiplier, while Jade Eternity features a x3 multiplier.

With the stacked symbols and other ways this game can pay, like its siblings, this amps up the volatility, and makes the game a bit tougher than some of its other brethren.

The base game of Rich Traditions, in most installations I’ve seen anyway, gives you the choice while playing the base game of playing either 243 ways or 1,024 ways for the same bet. I didn’t see any paytable differences so it’s likely a volatility choice, just like with other scenarios where you have the number of ways differ.

You can retrigger in the bonus, which is fun!

Jade Eternity works a bit more like 5 Treasures in that you get to choose between five animals, each with less spins than the last. For the lowest paying animal you get 12 spins; for the highest paying animal you get 4. If you land a portion of a full reel animal, the reel expands to reveal it all, making it taller and increasing the ways pays for that spin.

If you get multiple tall animal symbols it gets pretty spicy fast; they also match with the 8 symbol for some extra income.

Retriggering is possible in this bonus version as well.

I’ve played these extensively at Empire City Casino in Yonkers, New York, as it’s a fun game to play in their line-up and with payouts of over 90 percent, they pay better than they will just about anywhere else. But that’s not the note I wish to share.

If you want to be surprised by which progressive you are going to win, don’t look over to your neighbor’s machine when your tree shakes. All the other machines in the bank will reset the number at the beginning of your bonus. While the picking bonus is always predetermined, you won’t see this same effect on Class III slots because the payout is awarded upon the third matching symbol, not at the beginning of the bonus.

This means on Class III machines you can snatch a progressive away from another player picking slowly (I’ve done this on sibling machines like Dancing Drums when they’ve been high enough). But on machines in markets like New York, which aren’t Class III, your progressive is safe the moment you land the picking bonus – just don’t look at your neighbor’s screen or else the surprise will be ruined (although you won’t know if you get a Double Luck until you move your way through the bonus!)

Here is a video from TheBigPayback featuring the Rich Traditions version: