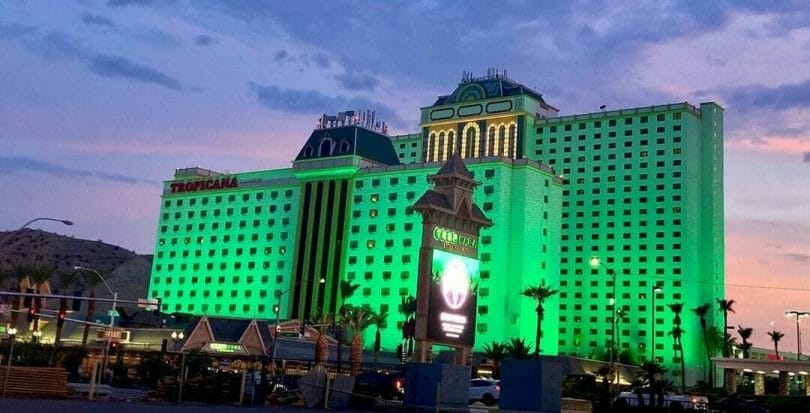 During recent visits to Laughlin, I have had the opportunity to stop by Tropicana Laughlin, and my latest visit I had a room there for two nights. Tropicana Laughlin, like Tropicana Atlantic City, was owned by Eldorado before the acquisition of Caesars. However, Caesars is the brand and players club system taking over.

What I saw in Laughlin was very different than I had witnessed in Atlantic City. Tropicana AC was a priority for being merged into the system, and with its relatively new players card system (which has since been rolled out at other properties, like Harrah’s Atlantic City), it was completed awhile ago. However, that rollout was months after it was expected to be done originally.

Tropicana Laughlin finally got the new card system in August, more than two years after the merger. Other decisions indicate this property isn’t a priority for the company. I’ve made two visits now to Tropicana Laughlin; a Wednesday night visit in fall 2021, and a Friday and Saturday night in fall 2022.

The casino floor was a pretty good size, with one long room full of machines effectively. There was a bar in the center, a good amount of video poker throughout (pay tables were better than Vegas, but nothing full pay), and overall with more than 1,000 slots, a good sized casino floor.

Unlike Laughlin, where most of the older machines had been swapped out and only a select set were remaining, Tropicana was more leaning towards older machines. There were definitely some new machines in there, but it was clear where the investments were going.

However, that meant some older mechanical reel machines were on the floor at good denominations. Even the new games had surprisingly accessible bet levels – it was the first time I had seen Quick Hit Blitz at $1.50 max bet (normally I see $2.50 or $5.00).

Table games were closed during my Wednesday visit. I was sort of surprised to see this, given table games were open everywhere else I visited. I presume they figured their players would visit the Harrah’s Laughlin pit, which was certainly busier both nights than most places, but it still seemed unfortunate that a casino this size had no table games at all running.

The second visit, Friday and Saturday night, table games were open, but not all – craps, for instance, was closed on a Friday night. Minimums were on par with Harrah’s Laughlin, not surprising given it was a weekend.

The casino also offers bingo, which is a more unique offering compared to many of its competitors. Unfortunately the Tropicana Laughlin site has become a pamphlet since converting over to the Caesars site, so there’s not much in the way of info there, but I did see the room open and busy while there on my latest trip.

My two nights at Tropicana Laughlin were comfortable. While definitely feeling dated, the room was clean and was fine in terms of what counts. The bathroom was perfectly acceptable and the bed was cozy, so it did the job fine.

I certainly find the Harrah’s remodeled rooms a step up from this, but this is a budget town so it’s not like it’s a massive difference.

Eldorado adopted the Caesars Rewards program, and as noted up top the property was finally updated to use it directly as of August 2022. All of the standard Caesars Rewards perks are available here.

Laughlin is among the markets that’s aggressive with running point multipliers. October of 2022 had a tier credit multiplier that ran the entire month, for instance. So you can definitely take advantage of this when visiting if you time your trip right.

The property wasn’t all that busy on a Wednesday night during my first visit. To me there’s a chicken and egg question of if it’s not getting the focus or investment because it’s slow, or is it slow because it’s not getting the focus and investment. It’s hard to know, but even as slow as it was the cocktail service took so long that night I opted to move on shortly after getting my one and only diet soda.

The promises I was given that would happen on the kiosk in terms of a reward when completing certain steps never ended up working, and ultimately it was just not the most pleasant or fun experience visiting Tropicana Laughlin. Other places in Laughlin had more energy and excitement, and while I don’t necessarily need that, it certainly was more enticing.

My second visit, on a weekend, it was definitely much livelier. There was a major concert in the city that weekend, and the place was packed. Cocktail service was also much faster so it could very well be that weekends are really where it’s at for many of these properties.

I did try Carnegie’s Cafe during my visit, and the food service was insanely fast for a Saturday with a pretty full restaurant. It was also delicious and well priced, a perfect combination for me. I recommend them for casual food if you’re in town.

Here’s a room tour from Tropicana Laughlin that will give you a representative sample of the rooms:

Here’s a walking tour of the main casino floor: