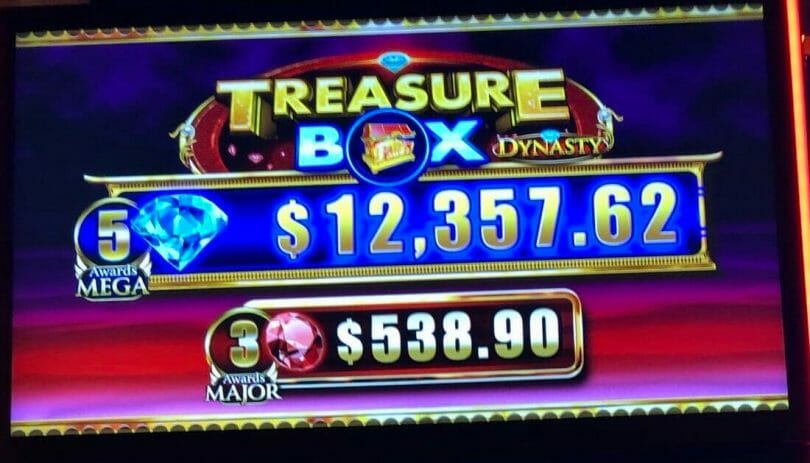 As one of its link-like games, the Treasure Box series offers a hold and respin capability that is enhanced by the ability to trigger it for less than 6 numbers when collecting keys. That key collection, a bonus meter that remains persistent on the slot over time, builds equity as it goes down, and is why we’re discussing it today.

Like its sister game, it features 50 credit bet increments in an all ways pays format of 243 ways to win on the 5×3 reel set. This initiates some volatility, and interestingly like my session on Treasure Box Kingdom I had a rough start on the game before it began to pay. There’s a lot of symbols on the reels too, more than a dozen in all.

Wilds appear on reels 2, 3, 4 and 5 and in one of the mystery symbol scenarios can be added, improving the chances of a win when they are selected.

Collect enough coins to meet what the game requires for a bonus, and you’ll win the respin bonus.

The thing that’s unique to this game is while you start out needing 6, like other link-type games, that number can be reduced over time by collecting keys. Each time you collect a key, the number of coins needed to trigger a respin bonus decreases by one.

Those bonus meters are persistent, meaning they stay put, linked to a given bet level, if you change bets or cash out and someone else takes over. The bet panel helpfully shares where the game sits on each bet level.

You then trigger the bonus by collecting the minimum number of coins required in a spin or more, or the meter reaches 0, triggering the bonus automatically.

This is a complicated bonus, but can get exciting quickly. The bonus starts by displaying a Treasure Box on reel 8 (the centermost reel of the bonus, as all 15 reel spaces becomes its own reel for the bonus’s duration).

If you collected coins to trigger the bonus, all get added into the Treasure Box and it’s converted to a coin valued at what they collected to be. If it triggered by reaching 0 coins needed, the box turns into a single coin valued in the normal range.

You start with three spins to collect more, just like other standard link games. Landing a symbol resets the counter, but another big difference is there’s a variety of things that can land:

As always, once the counter for respins reaches zero, the bonus concludes with a count-up of whatever coins and jackpots you’ve won.

Higher wagers increase the chances of winning a higher progressive, as normal. Respin bonus reels factor in bet levels, number of locked reels to start the bonus and the bonus meter number at the time of the trigger.

The bonus meter on the bet level you triggered it will reset to 6 coins required upon completion of the bonus. Each progressive can only be won once per bonus; the flat Mini jackpot can be won multiple times in a bonus.

Retriggers are possible, and award the same number of spins as seen above, based on how many symbols you get on the retrigger.

You are guaranteed a win every spin, which helps – I got a solid 50x bonus out of the one triggered above, so the bonus definitely has some potential.

Bonus reels are in use, and the number of mystery symbols are reduced, focused on the higher paying ones. This can help increase the chances for line hits in the bonus.

Coins that land in the free games are collected, but at 3x value. Coins are therefore have a value in the range of 30 to 2,250 credits times the line bet.

It’s that bonus meter with the key collection – the closer you are to zero, the better your chances of triggering the respin feature by either reaching 0 symbols needed, or just getting more symbols than you need.

When you find this game in a multi-denomination format, there’s multiple bet levels of potential opportunities to find the meter in a potentially good location.

The Slot Cats played the Dynasty version in a recent video, which can be seen below:

SLOTaholic played the Dynasty version as part of his 100 Spins series:

KURI Slot played it as part of the 50 Friday series: