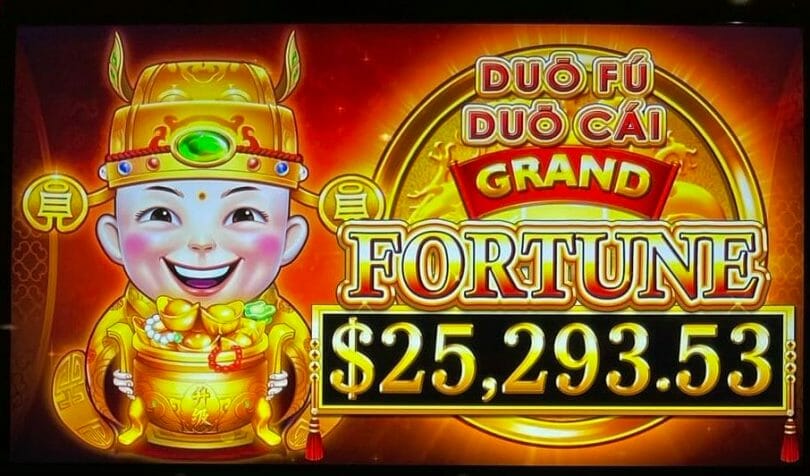 The Duo Fu Duo Cai series is a long-standing one on the casino floor, incorporating such games as 88 Fortunes and 5 Treasures, as well as more recent entrants like Flower of Riches. The model has also inspired other directions such as Dancing Drums and Coin Combo.

So it’s not surprising that Duo Fu Duo Cai Grand incorporates some aspects of these newer games back into the main series, both for better and for worse. I played the Ingotcha version; there is a Dragons version which differs in a few ways from this one.

The version I played dispenses with the choice of gold symbols, although the pay table indicates this choice can be made available. But with all gold symbols active there’s still two bet levels. The 100 credits level effectively improves the payout range for one of the bonuses, a sort of More/Better Bonus type of bet focused on that aspect of things. But we’ll get to that in a moment.

One thing that’s carried over from the Coin Combo series is the anemic pay table that is found on Hurricane Horse. All five premium symbols pay the same, so it doesn’t matter which one you line up, as long as you line them up.

The game is all ways pays, so if you get stacked symbols lined up it can help offset some of the anemic pays. But a full screen of any of the premium symbols only yields about 60x your wager at the 100 credit level or 70x your wager at the 88 credit level, so you’re not going to necessarily make a ton of money on the base game.

The game has a true persistence feature of sticky wild symbols. When none are present they can be gold; the importance of that will be covered in a moment. When sticky wilds land, they will persist for two additional bought spins, unless you land more, in which the counter then resets back to two.

If at any time you get six sticky wilds, you trigger the Bei Bei Gao feature, which is a hold and spin feature. The wild symbols transform into coins and you get three spins. I’m sure you know what happens next – land another coin, the counter resets, until you either run out of spins or fill the board. Filling the board awards the top progressive, the Fortune progressive.

The prizes the coins can be awarded depend on the bet level (the pay table incorporates bet options that were not available at the machine I played):

So as you can see, the 100 credit bet boosts the potential here, although clearly it’s not a guarantee you’ll get the higher end coins, just a chance for them.

One wrinkle is for every reel column you fill with coins on the reels, that column is eligible for a multiplier spinner, with one spin awarded for each reel completed. The game will select a reel and the multipliers will spin above, and whichever multiplier stops above it will get multiplied. If you get multiple spins, and the same reel is selected, it can get pretty healthy on the payouts.

Once the bonus is concluded, any wilds locked are unlocked, so you start with a completely clear reel set again.

Whenever a wild lands or is on screen through the persistence feature, there is a chance the Jackpot Feature can be triggered, similar to other games in the series. If the bonus was triggered by a red wild symbol, the standard 12 picks with the Mini, Minor, Major and Grand on offer will take place, in a predetermined bonus.

However, if the symbol that triggered it was gold, you get the Golden Jackpot Feature, which starts with an initial pick screen with six choices, also predetermined, to upgrade the Jackpot Feature.

Prize Upgrade removes the Mini and adds the new over-the-top Fortune progressive. Double Pick lets you win two prizes, a carry-over from some of the new games like Dancing Drums Prosperity and 88 Fortunes Money Coins where you can win two prizes.

Then you proceed to the 12 choices like normal, and either pick until you win one jackpot from the Prize Upgrade stack, or two jackpots if you were awarded the Double Pick.

One big difference is here, the lowest three prizes are now flat jackpots instead of growing progressives, but they do shift based on bet.

I gave this game a lengthy go on my most recent Las Vegas trip, and was unable to get the bonus despite getting up to 4 or 5 sticky wilds multiple times. The low paying line hits make this game difficult if you aren’t getting bonuses. Eventually I got to a Jackpot Feature, with a Prize Upgrade, but won the $18.88 minor, which on $1 bet is just meh.

I’ve spoken to other players who have had better luck on the game and think more favorably of it accordingly; like many of these games they’re volatile, and the bonuses carry a good chunk of the payout potential, so that’s what you’re really playing to achieve. The chance to buy a bonus might increase the interest of games like this.

The Dragons version plays more like Coin Combo Hurricane Horse in that the wilds pop out randomly and move each spin up a space. The bonus for that game is triggered by three bonus symbols, and offers free games. The line pays are equally anemic, though, on that version.

PandaJock Slots played the Ingotcha version of the game with the hold and spin feature:

SlowPoke Slots got some progressive picks, including a Major (don’t get excited), and a hold and spin bonus in this video, where he plays both versions: