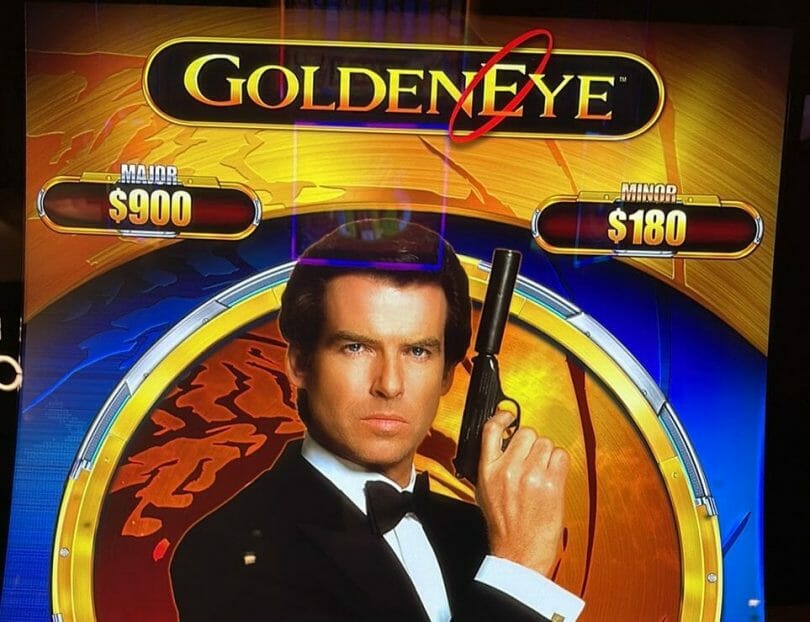 Because of all the writing I do on slots, and I’m in a casino of some sort pretty regularly, I often get asked what slots are my favorites. Like many players, this shifts for a variety of reasons – casinos change the games on the floor, new games come out, a game can be more or less generous at a given time – but there’s always some sort of list.

So I figured in today’s post I’d share a few of my favorites, with specific reasons as to why I’m seeking them out on the casino floor.

I first found Golden Eye at Virgin Las Vegas, and it was added to the 007 second of Mohegan Sun as well. I played it at Mohegan recently to see if it played out similarly to my first experience at Virgin, and it did.

First off, the line hits relative to the bet are pretty lucrative in the right circumstances. So are the bonuses – like my first longer session at Virgin I got two wheel bonuses, and this time I got the Respin Bonus for the first time, which was pretty crazy – lots of boosters and multipliers that helped build up the pay.

Both machines were configured with access to the Grand jackpot at as little as a $1 bet – I also liked that touch, as it makes it more accessible than games that require a $3 or $3.75 bet.

Given it’s a licensed game, it’s been a pleasant surprise – really well balanced, pays in the base game and the bonus. It’s just really well done.

The Dragon Legends Fire Gem and Aqua Gem games are both variations on the Fire Link math model, with each having the ability to upgrade prizes over time in the Hold and Spin bonus. When the upgrades flow, the bonuses can be really bountiful. Here, I first discovered this game on a Carnival cruise ship of all places, and Mohegan Sun after that.

Like with Golden Eye, I’ve been giving these more play to see if what my first experiences were like continues to hold, and they are – bonuses come out about as often as I saw the first time, and it’s really down to the upgrades as to whether the bonuses will pay out well. In one instance the upgrades weren’t as plentiful but I unlocked to the top row, which balanced it out, and still paid well.

Both versions are on my seek out list as I venture to the casinos again. Initially I liked Fire Gem more, in part because of the expanding wilds feature on the base game, and the potential of upgrading a bunch of symbols in the bonus when they connect, but I’ve come to appreciate Aqua Gem too. Also to be said – getting the free spins bonus is hard. I’ve given both versions a decent amount of play already and have not seen a single free spins bonus. The hold and spin is definitely the lead bonus here, which matches up with Fire Link so I guess that shouldn’t be surprising.

Even though the bet levels are nearly double original Buffalo, the adjustments made to keep Buffalo Gold Revolution interesting works for me. The upgrades to symbols, the wild multipliers even on the base game, the wheel and the gold heads all add something and it all works together.

And even though five of a kind buffalos pay the same on both the original Buffalo and Buffalo Gold Revolution, the pays were so good on the original game that I still get excited when clumps of buffaloes go all the way across. In a recent session betting $1.50 I got $96, $72 and $48 line hits on Buffalo in about a 2 minute window. Who needs a free games bonus when the line hits are bolstering you up fast?

I like playing both games now, as they each offer something a bit different, and both keep me engaged and entertained. It really shows how well Aristocrat stewards some of its marquee brands, evolves the games but keeps them in a place where exciting moments can happen.

I tend to like Quick Hit games in general, but Quick Hit Blitz is a more recent example that strikes a nice balance. Line hits can come through with some really strong payouts, especially if you get a lot of stacked symbols like bars or 7s.

I’ve had a couple of recent examples where the 7s came out in a strong wave and threw me 50x my bet, for an example, but even a lot of bars can pay decently well, and since different bars and different 7s have mixed pays, it can help the game’s base game payouts.

The Quick Hit Blitz bonus is the rare Quick Hit game that lets you have a shot at progressives during the bonus. It’s a well-structured bonus rounds that can deliver 50x+ or 100x+ with enough frequency that the bonus also feels substantial.

The only challenge is that some casinos put this game at a $5 or $10 max bet, out of reach for lower players, but I really enjoy the game at a $2.50 bet, and at Tropicana Laughlin I’ve even seen the game as a $1.50 max bet, so lower bet options are out there.

Having written about this game in pretty good depth, Smokin’ Hot Stuff Wicked Wheel Fire & Ice was one I was looking forward to playing on the casino floor. Even more so than its predecessors, it feels like the potential for bigger wins is there, no doubt helped by the bet increase implemented on this version to add the additional upgrades.

I’ve had strong line hits, strong wheel bonuses, strong picking bonuses across the board. I’ve also seen its tougher side, but that’s nothing new given the original Smokin’ Hot Stuff Wicked Wheel has smacked me around enough in the past too.

But I feel like there’s more opportunity on this one, so they did a good job of balancing this out here. The line hit above was a recent example of the game catching me by surprise with a line hit I don’t often see on a game like this.

What games have had your attention lately? Share in the comments below!